In the midst of all of the WWDC opening keynote madness, Cupertino-based Apple Inc. has been quietly making some revisions to its online store and some product versions. Once such revision will see the existing 29W USB-C power adapter replaced by a new version offering 30-watts of power delivery.

The older 29W USB-C power adapter isn’t going to go down in the sands of time as Apple’s biggest-selling accessory available via its online or physical stores, but it’s still a popular accessory amongst MacBook owners who may have needed a replacement for the one provided in the box at the point of sale.

This accessory will still be available but has now been revised to offer an ever-so-slightly higher power delivery rate in the form of support for 30W rather than 29W. This will definitely be good news for those individuals who have been holding off on the purchase of this hardware.

It’s especially good news considering we have a slight performance improvement in terms of a higher power delivery output but without having an increased price. That means that anyone interested in Apple’s USB-C power adapter will now get the 30W version over the older 29W version attached with the same $49.00 price-tag.

It’s a total unknown why Apple has made this change and what the driving force behind it is, and especially confusing considering it doesn’t appear to be a huge performance bump or improvement. However, it’s unlikely that anyone will really care considering there are no price implications attached to the product revision. 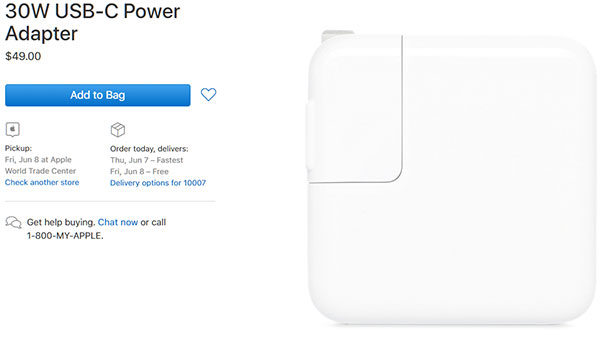 The USB-C power adapter was designed and released for those individuals who own one of Apple’s 12-inch MacBooks but was also purchased by iPhone and iPad owners in possession of a device that supports faster USB-C charging speeds in order to get power into their devices quicker than via a standard out-of-the-box charger. It’s likely that even with this 30W revision that users will still purchase the accessory for exactly the same use case and won’t be put off at all by the change.

Apple may have tweaked this product but it doesn’t look to have made any functional or performance changes to any of its other USB-C Power Adapters designed and sold for its other hardware.