Apple’s iTunes App Store is awash with content, and as the company itself pointed out at the big iPhone 6 event last week, now home to some 1.3 million apps and games. But while it’s easy to find an app you head about through a friend, say, by using the Search feature, discovering new content is not such a simple task, and with this view being shared by many users and commentators alike, Apple has just made it easier for developers to promote their stuff.

When you see a game or for the first time on the App Store, you’ll get screenshots, a glimpse of the icon and often endless paragraphs of description and testimonial. But while you may be convinced that it’s worth the $1.99 asking price, you soon often realize upon downloading that this wasn’t the case, and so to give users a slightly better insight before they part with their hard-earned, the new video previews allow devs to compile short videos demonstrating an app’s features.

It’s an idea that perhaps should have been implemented quite a while ago, but then again, the same can be said for quite a few of the features that Apple has baked into the iOS 8 update. From third-party keyboards to tailored Notification Center widgets, Previews have been a long time coming, and hopefully, the days of frivolously wasting change on dud apps and games should be long behind us.

In addition to Previews, Apple has also introduced Bundles, which permit devs to sell apps in clusters and at a discounted rate. This not only helps fans of one app become more aware of what other treats the author has on its roster, but also means users can save money if they want to grab a family of apps in one fell swoop. Oh, and if you happen to have already paid for an app or two available as a bundle, you can still take advantage of the deals since you’ll be able to ‘complete’ the package at a rate pro rata to the discount on each app. 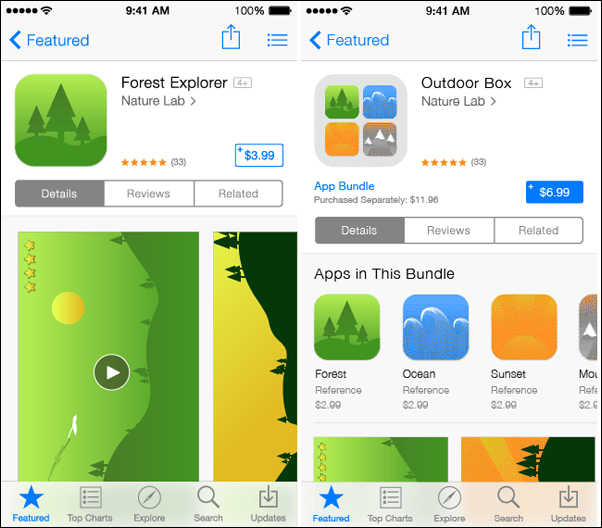 Bundles and Previews are both very necessary, welcome inclusions to the App Store’s repertoire, and with such an unholy quantity of apps available and counting, each new feature makes it a little bit easier for developers of apps that might otherwise have been swept under the rug by the major players.