One of the factors that points to an imminent release of a product is when ads for it are being made. An alleged post on Craigslist regarding a cast call for an "iPhone 5" ad was posted and pulled within two hours, but thankfully still indexed by a few search engines and screen captured by some users. Is a new iPhone imminent?

While the listing does not provide specific information about the product, it asks for a cast of 5 people, both male and female actors of different ethnicities and ages. That’s it, an incredibly standard ad.

The only eye-catching part of this offer is that customers will be paid in British Pounds, even though the ad will allegedly be taped in Los Angeles. That can be explained by the fact the company responsible for the commercial might be based in Britain. About one month ago, a similar ad ran on the New York Times, although the product was only identified as an "iPhone", not an "iPhone 5", but the production company was the well-known British Tiger Effects:

Of course, this could simply be a plain and simple hoax, considering how rumors have suggested a future iPhone would still be months away and how many are starting to believe there won’t be an iPhone 5 this year, only a smaller upgrade dubbed the "4S". Yet, "iPhone 5" could be a standard designation for a future iPhone device, and not necessarily a big revamp. 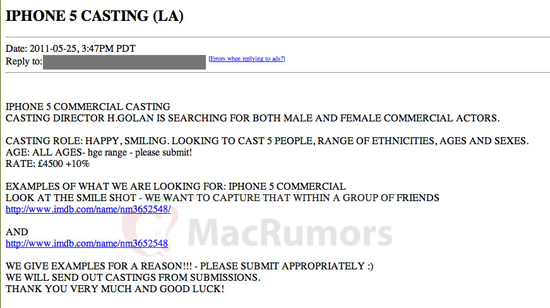 Apple is known to hire outside production companies to tape ads shortly before product launches. Last year, there was a cast call for FaceTime and the then-unreleased iPhone 4. A taping so early could point to an announcement around the WWDC time frame, which is set to start on June 6th, although nothing’s certain at this point.

Rumors of a future iPhone have been ongoing for the last few months. Enhancements will likely include a faster processor and an 8-megapixel camera, unlike the current iPhone 4’s 5-megapixel one. Earlier this week, an alleged photo of the a next-generation iPhone’s back plate was released. It looks similar to the one found on the iPhone 4, aside from the positioning of the camera.

Whether there will be an "iPhone 5" or not is up in the air. Vague information on an alleged Craigslist ad will only fill a small piece of the puzzle.