In light of the recent situation regarding the company’s first in-house Maps application for iOS 6, Apple CEO Tim Cook has written an open letter to customers on his company’s website in an attempt to address the issue. The letter, which can be found in its entirety after the jump, sees Cook make an apology for delivering a feature below standards of expectation, and rather honestly, goes on to suggest a bunch of rivaling mapping solutions one can utilize for the time being.

iOS 6 arrived last week, and ever since, scarcely a moment has gone by without criticism of the new Maps app. Having collaborated with C3 Technologies to offer 3D Flyover views and turn-by-turn navigation, Apple felt it had created something worthy of displacing the omni-present Google Maps, but the backlash over the past ten days has shown just how wrong the fruit company were.

Recognizing the gross error of judgment, Cook notes in the letter:

We are extremely sorry for the frustration this has caused our customers and we are doing everything we can to make Maps better. . . [meanwhile] you can try alternatives by downloading map apps from the App Store like Bing, MapQuest and Waze, or use Google or Nokia maps.

As bad as the new Maps app may be, one has to appreciate Cook’s honesty in citing the names of the very applications Apple is trying to compete with, and it’s something the fruit company’s head honcho did not have to do. Never did I think I would see an Apple executive recommend using Bing, which speaks volumes for the mess Apple has found itself in.

Most of you dissatisfied with Apple Maps will have opted for Cook’s suggestion of using Nokia or Google’s web-based services, although if you’re looking for a navigation app, you could also try out TomTom or Garmin, both which – despite their price tags – deliver solid performance.

It’s unknown just how long it will take for Apple to repair the inaccuracies and shortcomings of Maps, but on current display, it’s certainly going to take a fair while. Google is said to be offering its traditional Maps service as a native, App Store app in the near future, but once again, it doesn’t come with an ETA.

Here’s the letter in its entirety: 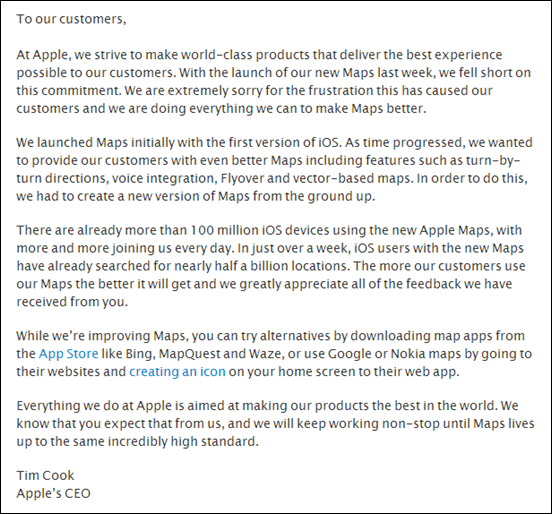