Announced alongside the iPhone 5 last month; the new fifth-gen iPod touch and the new seventh-gen iPod nano took nearly three weeks to hit the retail shelves, but the wait was worth it. To compliment the launch of the new iPods, Apple has pushed out a TV commercial (also available online) for said devices, and has been given a rather fun title; Bounce.

If you’ve seen iPod ads by Apple in the past, then you’re already aware that the iPod gets limelight way more differently than any other product which Apple releases. 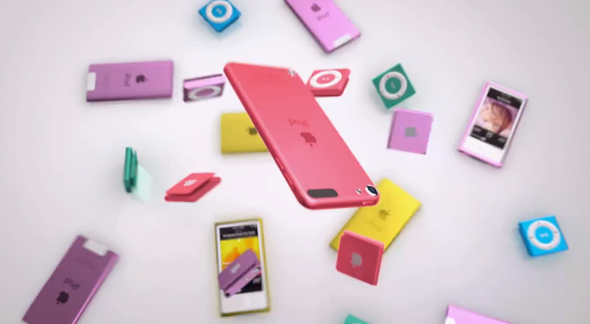 The ad itself fits the title perfectly, with Willy Moon’s ‘Yeah Yeah’ playing in the background, and the iPod touch, nano and shuffle.. well.. bouncing on the screen like there’s no tomorrow. Rather than highlighting the features of the new devices, Apple has deemed it necessary to focus on the new vibrant colors and design of the new iPods. And I have to say, they’ve done a pretty nice job at flaunting their design, have a look at the ad yourself:

Every iPod now in color.

I’m a huge fan of iPod ads, and the last ad which Apple pushed out was for the fourth-gen iPod touch, and that too was released over ten months ago. Keeping track of the release cycles for the ad translates to the fact that Apple is really not putting enough resources on marketing the iPod like the iPhone or iPad. Maybe that’s because Apple doesn’t deem it necessary to do so.

Anyhow, seeing the new iPod ad after almost an year really brings a breath of fresh air to music fanatics, that includes myself. Here’s to hoping that Apple will show some love to the iPod as we move forward.

Last month, Apple aired first TV commercials for both the brand new iPhone 5 and EarPods. You can watch them online here.

(Thanks to Johnathan A Smith for the hat tip!)