There have been many, many reports suggesting that Apple will finally update the iPad mini this year, with the fifth generation mini tablet arriving at some point as yet undetermined. We don’t yet know what the update will entail, but there had been suggestions that we could see a design change as well as support for Apple Pencil.

However, according to a new report by leaker @Onleaks, and a new CAD rendering he has received, the iPad mini 5 will instead merely be a feature bump.

While the leaker hasn’t yet made the image available, he did say that it appears to suggest that there are no huge design changes to look forward this year, beyond a “relocated mic, centered on the upper back panel.” That doesn’t necessarily mean that Apple Pencil support is out the window, but it does mean that we’re very unlikely to see support for Face ID. That, in turn, means there will be a Home button on this thing.

Just got my hands on alleged #iPadMini5 CAD. If legit (can’t vouch at 100%), there is indeed (just as rumored) no external design changes (except of relocated mic, centered on upper back panel). In short, it will very likely be a specs bump only update…

All of this does make sense considering the iPad mini’s normal place towards the bottom of the iPad price range. If Apple does intend to keep the iPad mini as a more affordable offering – something that was historically the case but isn’t right now – a move to Face ID is highly unlikely. 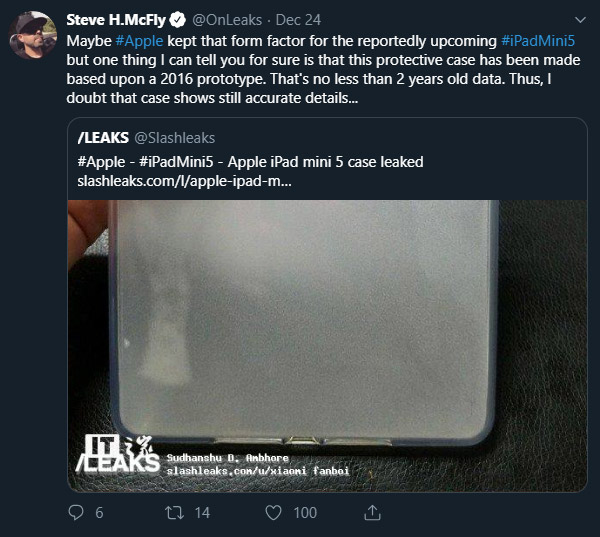 We’ll have to wait and see what actually happens, and we might see some additional leaks ahead of an anticipated Spring launch window. We’ll just be happy to see our beloved iPad mini get some love, even if it is long, long overdue.