Those looking forward to picking up a new, finally refreshed iPad mini could be set to get a tablet that supports both the Apple Pencil and Smart Keyboard, according to a new report by developer Steve Troughton-Smith. The well-known beta diver has found references to new tablets in the latest iOS 12.2 beta, and they support such accessories.

While Troughton-Smith urges caution when reading too much into his report, he does say that iPad models denoted J210, J211, J217, and J218 all come in two different sizes, which would play into existing rumors of an iPad mini 5 being announced alongside a new replacement for the current 9.7-inch iPad. He says that both sizes appear to support both the Apple Pencil and Smart Keyboard, which would make this the first iPad mini to do so.

Previously exclusive to the iPad Pro, the Apple Pencil is now compatible with the current iPad, so it’s clear that Apple is no longer quite so precious about it. The new iPads also appear to support Touch ID, so it’s also a safe bet that we won’t be getting Face ID, nor will the new iPads go Home button-free, like the 2018 iPad Pro.

It’s hard to glean much information about J210/J211, and J217/J218, the upcoming iPad models. It seems like both iPad sizes support a Smart Keyboard and Pencil, but it’s possible that neither include Touch ID (nor Face ID). Hard to imagine Apple shipping sans TouchID unless for $

Rumors have so far claimed that the new iPad mini and updated iPad will arrive early this year, and with iOS 12.2 already showing signs of the new tablets, it would appear that such a time-frame is certainly doable. March events have been regular occurrences for Apple, so our money is on new iPads being announced in a couple of months’ time. 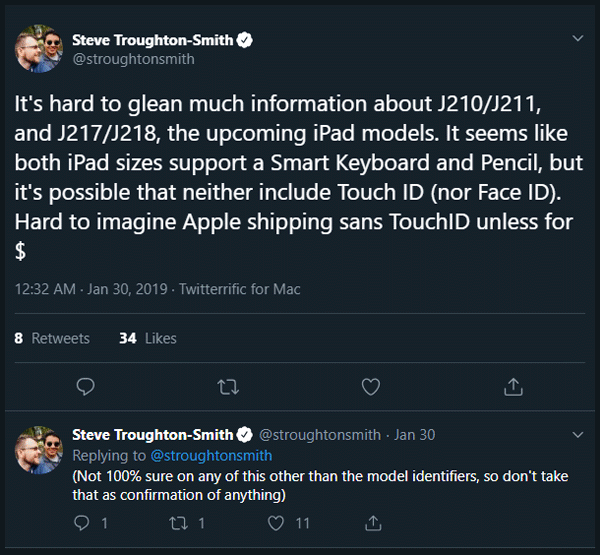