While Samsung has already promised to bring Android 4 Ice Cream Sandwich (ICS) to the Galaxy Tab 8.9 eventually, a trio of dedicated developers have already managed to get ICS working on the Galaxy Tab 8.9. We’ve got the details right after the jump! 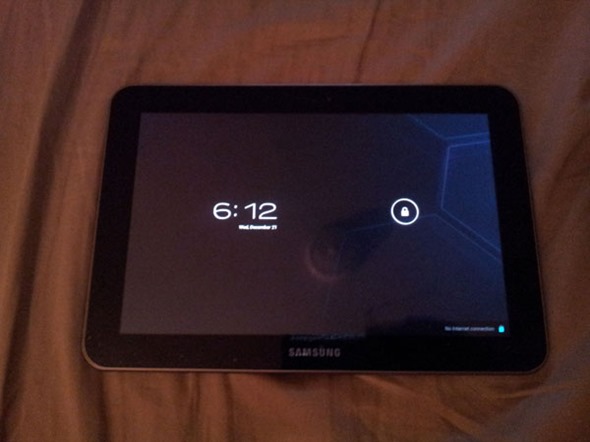 News of the custom ROM comes from Engadget – a blog dedicated to covering consumer electronics and the technology that powers them – in the form of a short post in which they discuss the ROM, what’s working and what’s not.

At the moment, touchscreen, rotation, sound, hardware acceleration, GPS and Bluetooth are working fine but WiFi and the camera don’t.

There are actually three different developers working to get Android 4.0.3 ICS working on the Galaxy Tab 8.9. Each developer’s ROM is at a different state of development and these three ROMs, once stable enough for daily use, will be put together into one custom ROM.

With their hunger for Ice Cream Sandwich guiding their hands, a trio of XDA members decided to whip up a homebrew version of 4.03 for their Sammy tabs. While the bootable builds, of which there are now three, are far from complete, an update over on the site’s dedicated forum notes that Bluetooth, GPS, hardware acceleration and the accelerometer are now functioning, with efforts continuing to enable WiFi.

Until they decide to release it, all Galaxy Tab 8.9-toting Android enthusiasts can do is watch the video we’ve embedded below:

We will, of course, have a guide ready when the developers decide to release the ICS ROM, so stay tuned to Redmond Pie! You may, alternatively, consider waiting for Samsung’s official platform update to Android 4 Ice Cream Sandwich which is expected to be out sometime after Q1 2012 for the Galaxy series of tablets.

Those of you with older Galaxy devices such as the Galaxy S and original 7” Galaxy Tab will be disappointed to know that Samsung has officially confirmed that ICS will not be readied for them. However, I don’t think there is any need to be disappointed, ICS will eventually get to these devices in the form of custom ROMs (such as CyanogenMod 9, for example). As a matter of fact, the original Galaxy Tab already has received an ICS port, which you can check out here.