Amazon App For Apple Watch All But Confirmed

In light of the upcoming Apple Watch, due to be released next month, the online retail giant Amazon may be looking to launch its dedicated shopping app for the Cupertino’s first wearable gadget. More information to follow right after the jump.

So why not? The Amazon app is already present on the Android and iOS platforms, as well as its own Kindle lineup of devices, so why should Watch OS be any different, be it for a smartwatch. Apple has revealed a bunch of apps that will be available to download when the Apple Watch becomes available on the 24th of April, but Amazon was not amongst the list. However, there are reports that the online retail giant may already be working on a Watch OS version of its 1-Click ordering system.

Amazon already has a version of its app for Android Wear powered smartwatches, and it is likely that the Watch OS iteration of the app may just function in the same manner as well, though with a touch of Apple on top of proceedings. The app should allow consumers to search and even buy products right from their wrist using Amazon’s 1-Click ordering system.

So should we expect the Amazon app to be released alongside the Apple Watch, or for that matter, should it be expected at all? Well, Amazon isn’t being too specific in answering these questions and has instead resorted to a rather sly comment saying:

“Amazon is constantly innovating on behalf of our customers. We are committed to being anywhere customers want to shop. That includes watches. We have an Amazon shopping app for Android Wear and will look to expand to other devices.” 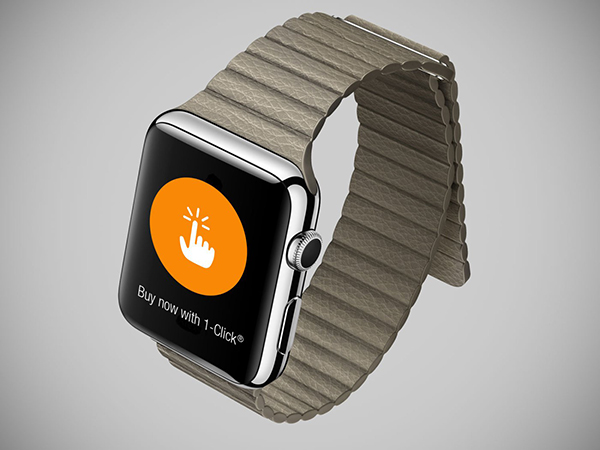 I for one will read that as a big yes, unless Amazon meant Pebble by any chance when it says it looks to expand to other devices. The Apple Watch is set to go on preview displays on the 10th of April, and should start shipping out to consumers on the 24th.

What’s your take on the matter? Are you ready to buy a new pair of headphones from Amazon using Apple’s new wearable that is about to go on sale next month? Share your thoughts with us.