Although the notion of Samsung joining the growing list of big-name companies purportedly delving into the smart watch market is not exactly news, yesterday, it was revealed that such a device could debut alongside the Galaxy S IV, whenever that may be. As a follow on from that story, SlashGear has caught wind of a few screenshots floating about a Korean message board which, it is claimed, offer an insight into the supposed smart watch, which is naturally being dubbed the ‘Galaxy Watch’.

The talk of Apple releasing an ‘iWatch’ has been around for as long as any Cupertino rumor one could care to mention, but with the release of the Pebble smart watch creating something of a storm, the murmurings of Apple, Samsung and others joining the Pebble craze has gained a significant amount of traction.

In this latest leak, the device the screenshot has been taken from is called the Samsung Galaxy Altius – Altius being a codename traditionally associated with the Galaxy S IV. It would appear as though the device has some kind of data plan, a 500×500 LCD display, and runs on a variant of Android. The slider indicates the device will likely be a touchscreen, and although this could well be pure fiction, it does, in theory at least, looks like an appealing device. 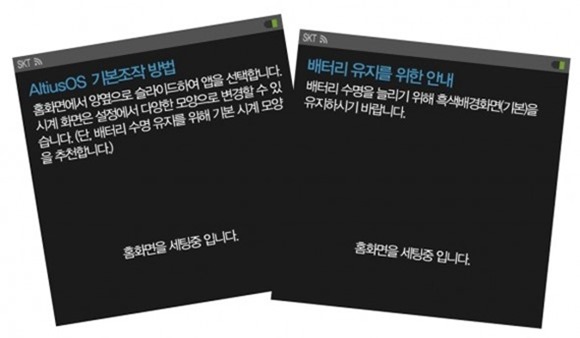 At this point in time, it really is hard to tell for certain whether Samsung, or indeed Apple, have any plans to release a smart watch device in the near future. A team of as many as 100 individuals are said to be dedicated to the task of bringing such a product to market for Apple, and as we’ve seen increasingly during the last few years, Samsung and Apple tend to shall we say, release similar products at similar times?

Although I have yet to be well and truly convinced by the idea of a smart watch, most of the products Samsung and Apple have brought to market over the past few years have been undeniable, often unprecedented success stories, so it will be interesting to see these two titans embattled in yet another duel.

Do you like the idea of a Galaxy Watch / iWatch? Share your thoughts via the usual mediums below!