What with it still being very early in the year, lots of rumors continue to be frivolously thrown about as excited tech fans sink their teeth into the prospect of some landmark releases this year. The console wars are set for a step up, with both Sony and Microsoft releasing their respective next-gen offerings, and if it’s the unofficially-dubbed PlayStation 4 you’re waiting patiently for, it looks as though the controller for the upcoming entertainment system may have been leaked. Well, a picture of it, at least.

It is widely presumed Sony will announce the PlayStation 4 at its special event to be held in New York City event next Wednesday. The event is being billed as a discussion of the future of the PlayStation brand, and with many hardcore gamers desperate to ditch their ageing hardware and sink their teeth into the upgraded console, it could be that the ‘leak’, which you’ll see below, is little more than the wishful thinking of a fan.

Sourced by Destructoid, it fits swimmingly with the notion of the touch-screen being a feature, and although some will surely disagree, I think it looks rather nice. Unlike other console makers, which have sought to reinvent the joypad of each console through generations, Sony has stuck almost religiously to the same design which featured on the original PlayStation back in the nineties. The PlayStation 2 saw the dual-shock implementation, while the only change with the PlayStation 3 was wirelessness.

The subtle touch-ups have worked well for Sony hitherto, and although the touch-screen is a significant addition compared with the aforementioned alterations, it’s likely to be one met with general apathy in comparison to the console itself. 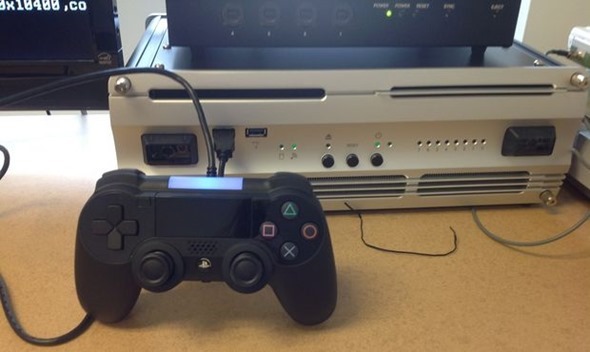 As well as the touchscreen the omni-present START and SELECT buttons look to have parted, but once again, this is in line with previous reports pertaining the controller of the PS4.

Everything will become clearer as of next week, when the Japanese company will hopefully leave the rumor-makers in no doubt. Whether the leak is the real deal or just made up, it’s nice to have a semi-believable image to tie in with the speculation.

What are your expectations of the PlayStation 4? Please do share them with us via Google+ or Facebook.