Alcatel Announces Affordable Smartwatch With A Circular Face, Here Are The Details

The smartwatch industry has been brewing ever since Pebble’s smartwatch took Kickstarter by storm, and alongside its vaguely-detailed Pixi 3 smartphone, Alcatel has revealed plans to deliver a new wearable to compete with the likes of the Moto 360. In fact, design-wise, Alcatel’s inaugural smartwatch effort isn’t too dissimilar to the traditional quirks of Motorola’s Android Wear-ready device, and although Alcatel hasn’t revealed too much thus far, it will follow the company’s trend of hitting the market at a base-level price point.

The Apple Watch is poised to arrive early on this year, although there’s no set date as yet, and while the Cupertino company has ramped up hype ahead of launch, the current lack of release has afforded rivals a golden opportunity to woo consumers.

The Moto 360 and LG G Watch R are just a couple of the many options doing the rounds, and Alcatel’s trump card appears to be the pricing. But while the company has bleated about it being "affordable" with its announcement, specifics have yet to be nailed down, and currently, we don’t even know what kind of tech. specs we’re going to be getting with the gadget simply named "Watch."

It’ll supposedly hook right up with Android devices, and like almost all smartwatches, keep track of movement activity. Every modern consumer electronics company seems to be tapping into the lucrative fitness and wellbeing market, and in joining the smartwatch game, Alcatel is following suit.

Alongside your to-be-expected array of activity tracking features, you get music controls and notifications. Alcatel also mentions photo-taking functionality, although this will almost certainly take the form of a remote shutter toggle that lets you control photos taken through your smartphone. We’re not completely discounting an in-built shooter, but given the affordability and lack of a native camera in most other smartwatches, it seems less than likely that this will be the case. 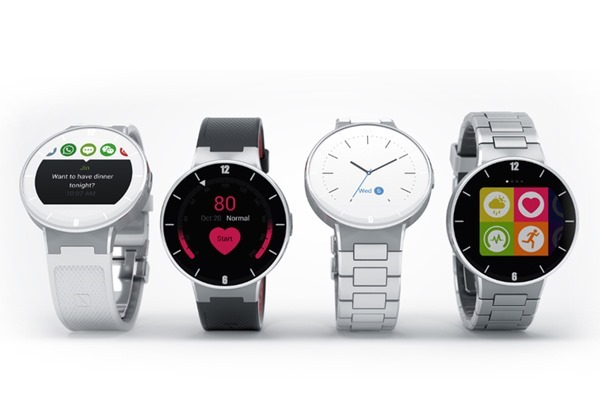 There’ll be a number of different styles and choices to pick from, with renders showing a variants offering metallic straps as well as others comprised of different materials.

Whether Alcatel will be able to create any sort of buzz, only time will tell. But for now, have a gawk at the press renders, and let us know of your first impressions by dropping a comment below.