25 Reasons Why Galaxy S5 Is Better Than iPhone 5s [Video]

A short while ago, we brought to you a video highlighting a bunch of reasons why Apple’s iPhone 5s is perceivably better than the Galaxy S5. In order to keep things fair, here’s a further clip outlining some of the features of the S5 that, it could be argued, renders Samsung’s flagship the more appealing option than its Apple-made counterpart.

In this video, which, as with the clip we featured previously, was also complied by the guys at PhoneBuff, the Galaxy S5 gets its chance to stake a claim as the best handset in the smartphone industry. 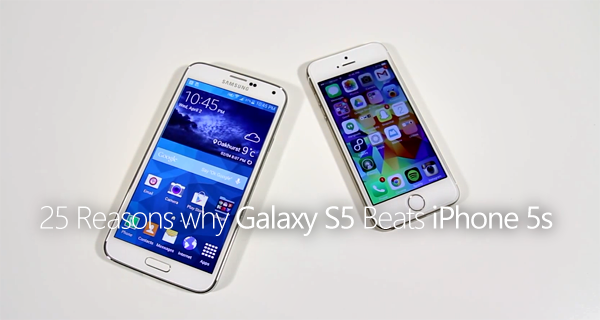 Since its release, the device has been heavily lauded for its impressive camera, and while the iPhone 5s’s rear-facing shooter is still very much competitive with the rest of the field, it’s clear that Samsung has gone above and beyond in bringing more to the table this time around.

Even though, as highlighted in the first video, the iPhone 5’s Burst Mode is better than that of the Galaxy S5, the latter benefits from 4K video shooting for some quite superb footage.

Accompanying any decent smartphone camera should be a solid display, and the Galaxy S5 does not disappoint. Sure, we could argue for days about the iPhone’s LCD versus the Samsung’s Super AMOLED tech, but there’s little debate about which device offers the crispest viewing capabilities: the S5.

Of course, a larger screen mightn’t necessarily be your thing, in which case, you’ll probably prefer the iPhone’s 4-inch Retina display. But the incredible viewing angles and rich colors – allied to more sharpness thanks to the higher resolution – sees the Samsung Galaxy’s panel win out here.

The video’s author spends a total of over eight minutes running through some of the Galaxy S5’s other great features, including its waterproofing capabilities and numerous other one-ups on the iPhone 5s. Whether you’re just an intrigued smartphone consumer or are seriously considering picking up the Galaxy S5, it’s well worth checking out, and even though we might have mocked the band-aid-like form factor at the MWC showcasing, it’s clear that Samsung has picked another winner with the S5.

With a “prime” model apparently incoming, the best may still be yet to come, but even if the beefed-up variant never sees the light of day, you feel that Samsung has more than delivered the goods already with the Galaxy S5.