The Samsung Galaxy S5 and Apple’s iPhone 5s may be of slightly different generations, but thanks to the bitter rivalry between the two companies that make them, are constantly compared with one another. The Galaxy S vs. iPhone war has been waged time and again over the past few years, and an interesting new video offers a series of reasons as to why the iPhone 5s is better than the Galaxy S5.

The video comes courtesy from the guys over at PhoneBuff and presents 25 reasons why the iPhone 5s is better than its fiercest adversary, the Galaxy S5. And whilst it may look that only one side is being chosen here, it represents a good way to entice the user on why one particular handset is better than the other. 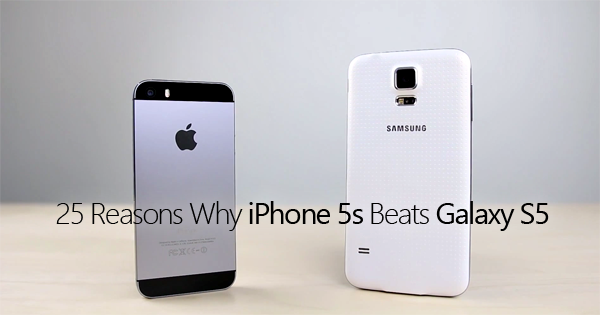 Of course, since it’s largely opinion-based, you mightn’t agree with some of the decisions made here, and all told, it depends on what you’re looking for in a smartphone as to whether you prefer the Galaxy S5 or the iPhone 5s. With that said, the video is still pretty thorough, and if you’re currently sitting on the fence, undecided as to which device you want to spend your money on, we’d highly recommend watching it.

Fighting the iPhone 5s’s corner is its generally seamless iOS software, better voice call quality and, among other quirks, a more impressive range of apps. By and large, developers still favor the App Store over the Google Play Store, and as such, the selection is much better for those rocking an iPhone.

The Galaxy S5 has plenty of trump cards over the iPhone 5s, though. From the 4K video shooting to the superior battery life, to the larger 1080p display and waterproofing credentials, the Galaxy S5 is definitely a superior smartphone in a lot of ways.

If you have your heart set on either the Galaxy S5 or the iPhone 5s, it might be worth holding back on your purchase for now. After all, the iPhone 6 is said to be releasing in the next couple of months, and with Samsung also apparently preparing a more powerful "prime" version of its flagship, you may want to wait and see what’s on the horizon before parting with your hard-earned.

Which do you prefer? Galaxy S5 or iPhone 5s?