One of the continued criticisms of the Apple iPad is that there’s no support for multiple users. Unlike the iPhone and iPod touch, which are predominantly personal devices used by one owner, iPads are often utilized by an entire family or group of friends. Thus, it would be ideal if each individual user could have their own login through which to tailor their own settings, apps, and general experience, and that’s exactly what a couple of concept makers have tried to achieve with this neat iOS 8 design.

Even though we’ve heard that Apple may be planning split-screen multitasking functionality at some point in the near future, it doesn’t appear as though support for multiple users will be headed our way just yet. This hasn’t prevented designers Tim Nikischin and Marc Philip Haesen from trying, though, and you could definitely envision their concept as a native iOS feature on iPad. 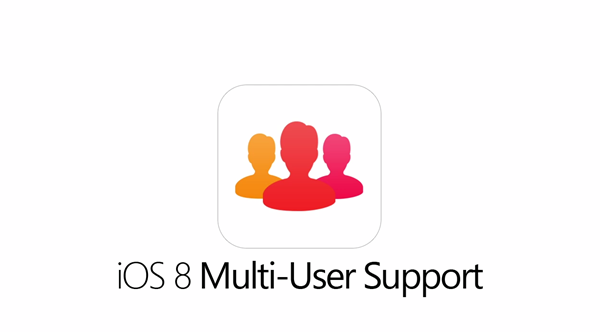 The way multi-user support could be implemented, as per this particular concept, is fairly simple. On the lock screen, each user has their own circular image (a la OS X) to represent their account, and a password protection feature to prevent unauthorized access. From there, each user can log into their own account for a completely personalized experience.

Eddy Cue mentioned yesterday that Apple’s product roadmap for 2014 is the most exciting he’s seen in 25 years at Apple, and although this gives us no indication of precisely what’s in store, Tim Cook’s earlier suggestion of “new product categories” leads us to believe that we could finally see that elusive ‘iPad Pro’ device.

If true, then features like multi-screen and multi-user would surely be at the heart of this new, larger slate, and even though it has been argued that multi-user support would lessen the likelihood of households buying more than one tablet, the continued amalgamation of iOS and OS X will inevitably see this feature crossover at some point.

The concept, which can be seen in video form below, is a little brief, and it might have been nice to see how some of the user-specific settings would have looked. But still, it gives a flavor of what Apple could bring to iOS at some point, so be sure to check it out: