When Apple launched the iPhone X, many believed that its $999 starting price would make it difficult for consumers to swallow but with big sales numbers and an increased average selling price, it’s clear that was simply not the case. That isn’t stopping Apple from planning to launch a more budget-friendly iPhone this fall, though, with an LCD iPhone – we don’t know for sure what it will be called yet – set to offer an iPhone X-like experience but at a lower price point.

With three new iPhones set to go on sale next month, TrendForce has been looking into the steps it believes Apple will take in order to continue to boost its average selling price, considering this is the figure that means Apple can sell fewer devices while continuing to make more money. With concerns about a shrinking smartphone market due to good old-fashioned saturation, increasing ASP is an important factor in Apple’s plans.

According to TrendForce, Apple’s OLED iPhones will support the Apple Pencil when they launch next month, making them the first iPhones to officially support a stylus of sorts. That will put them squarely up against the recently announced Galaxy Note 9, although the Samsung device does have the upper hand thanks to the fact it has a receptacle in which to store said stylus. Apple CEO Tim Cook may have let slip that stylus support is on the cards during a recent call when he mentioned using an iPhone and the Apple Pencil together.

The report also suggests that Apple will offer the OLED models in three storage tiers – 64GB, 256GB and 512GB, although the number of people opting for that highest capacity will surely be small. Samsung’s Galaxy Note 9 also ships with 512GB storage, plus support for another 512GB via microSD card.

At the other end of the spectrum, it is believed that the entry-level LCD iPhone will feature just 3GB of RAM, compared to the 4GB in the other iPhones. This, along with the less costly display, should see Apple price the new device at, or around, the $699 price point, the report says. 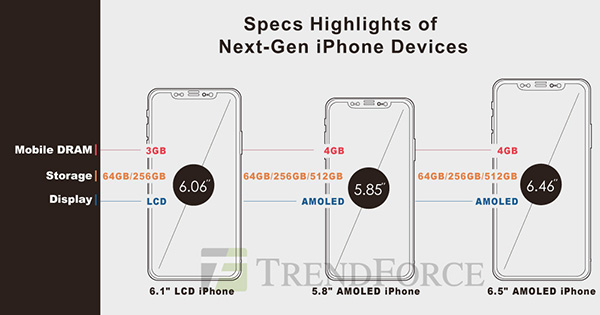