After a host of leaks and rumors, Samsung’s premiere smartphone for professionals and large-screen enthusiasts has finally been made official, though its debut may have been somewhat marred by an unflattering report coming out of Tom’s Guide. The 6.4-inch Galaxy Note 9, despite being laden with high-end hardware, falls short of its prime competition in the performance department. Specifically, the phablet has found itself lagging behind in the benchmark race.

While the differences in quoted scores may not necessarily be significant enough to be a cause for concern, prospective customers must note that the Note 9 is quite a bit newer than the devices that outshone it – the OnePlus 6, which has been on the shelves for approximately four months and, as might have been expected, Apple’s nearly year-old iPhone X.

Geekbench 4 multicore scores place the Galaxy Note 9 at third place with 8,876 behind both the OnePlus 6, which falls just short of first place at 9,088, and the iPhone X, at the top with 10,357. The new Note didn’t fare all that well in 3DMark’s Slingshot Extreme benchmark either, again settling for third place with a score that barely greater than that of the Galaxy S9+ and relatively much further behind the iPhone X and OnePlus 6, securing second and first places, respectively.

It isn’t all bleak for Samsung’s new release, however, as it bests Apple’s departing flagship when it comes to the brightness and color gamut of the display, where the gap between the two for the latter is quite significant – enough to be instantly noticeable. This was to be expected, given Samsung’s in-house expertise in the field.

The same can be said about the iPhone X outperforming Samsung’s new flagship, as recent history has seen the latter’s smartphones invariably lagging behind the iPhone line. The South Korean tech giant may not be too concerned, though, since such a gap in scores isn’t likely to sway many buying decisions. 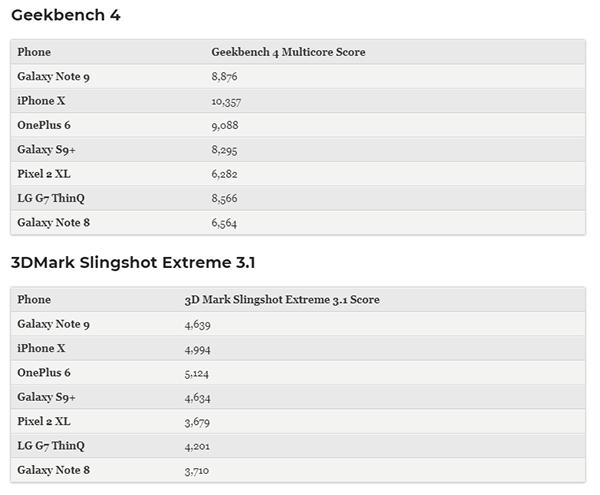 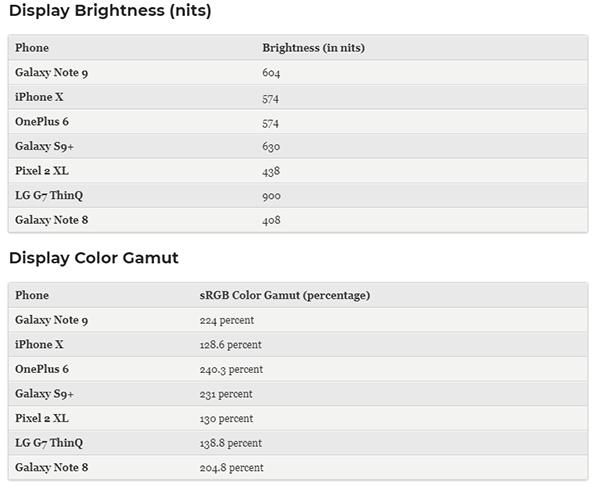