It’s officially official – Apple has used the opening keynote of this year’s Worldwide Developers Conference to introduce the new 10.5-inch iPad Pro. In addition, there’s also an update to the existing 12.9-inch model for those who prefer to have their slates on the larger side of life.

The new 10.5-inch iPad may be slightly bigger than the existing 9.7-inch version, but it still weighs in at just 1 pound and comes with a stunning Retina display with slimmer left and right bezels. The new display also gives enough room for a full-size on-screen keyboard for those individuals who want a more professional typing experience. From an accessory perspective, Apple will also be releasing a new updated Smart Keyboard that will support more than 30 languages directly on launch. 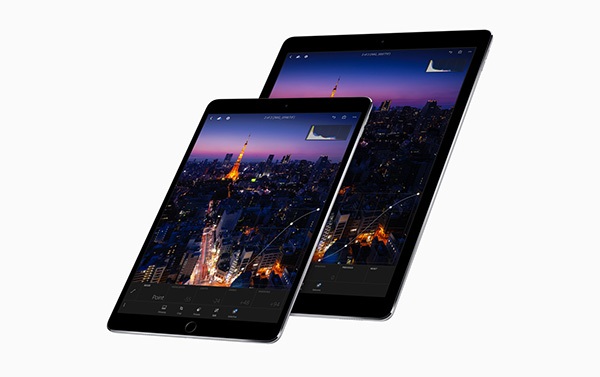 The display of any iPad is always going to be where the attention is, and it’s no different with this one. Updates include a True Tone display with a wide color gamut, ultra-low reflectivity, and up to 600 nits brightness. There’s also a revamp in the maximum refresh rate using new tech called ProMotion, bumping it up from 60Hz to an impressive 120Hz. And of course, the existing 12.9-inch iPad Pro is getting the same treatment to ensure that it stays best in class and isn’t overshadowed by the brand new 10.5-inch model. This will improve the responsiveness of the Apple Pencil as well, reducing latency to a mere 20ms.

Both versions of the hardware are getting a brand new A10X Fusion Chip, which is a six-core CPU with three high-performance cores and three high-efficiency cores. That’s accompanied by a 12-core GPU offering up to 40% graphics improvement.

For those who prefer to walk around with an iPad taking photographs, there is also the integration of the same wonderful camera from iPhone 7 offering the same high-level performance. There’s fast charging, a brand new set of gorgeous Smart Covers, and same high level of battery performance that users have become accustomed to on this type of hardware from Apple. Both the 10.5-inch and 12.9-inch models will ship with 64GB of base storage, with the newly introduced model starting at $649 and the larger model retailing for $799.

Both models can be ordered immediately and will start shipping next week. Also being added to Apple’s collection of iPad accessories is a new leather sleeve that includes a pocket for the Apple Pencil as well as a separate case for the latter retailing for $129 and $29 respectively.