A new video has made its way into the public domain that seems to show in detail the new audio accessory that will ship with Apple’s upcoming iPhone 7 next month.

Made available to the public thanks to a mobile accessory company, the video shows a working set of Lightning-compatible EarPods that are widely expected to be part of the iPhone 7’s value proposition when it is officially announced during a dedicated press event next month. 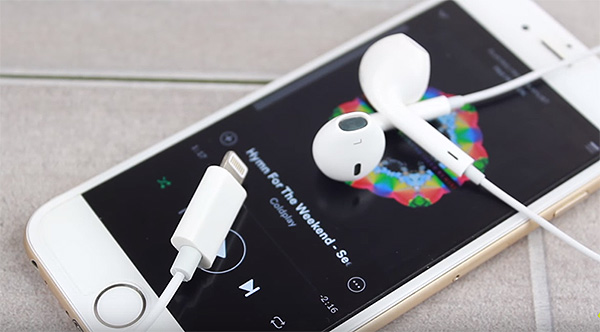 This year’s iPhone, which many are calling the iPhone 7, but with some suggesting it could be called the iPhone 6SE, will be the first Apple smartphone to ship without the iconic 3.5mm headphone jack that has allowed standard headphones to be used with the device since 2007. The removal of that connection has meant that there’s been a ton of speculation about the possible direction that Apple will take to replace the standard 3.5mm EarPods. Speculation has so far included a set of Lightning-enabled EarPods, a wireless offering built with Bluetooth, and even a Lightning-to-3.5mm adapter.

Long-term, the creation of a set of Bluetooth-based EarPods would seem like the most logical solution for Apple, but this latest video gives us the clearest indication to date that the iPhone 7 will ship with what could potentially be an interim Lightning-compatible accessory.

Of course, there’s no real proof accompanying the video to suggest that the accessory is genuine, but it looks to have the exact same quality that Apple would provide, and the accessory company has clearly demonstrated that the hardware actually works with a device, so we at least know it isn’t just an elaborate mockup.

If Apple does go down this route, then it will instantly breed familiarity with users. The EarPods look to be exactly the same as the current accessory that Apple offers, save for the fact that these ship with a Lightning termination rather than a 3.5mm jack. As a consumer, if you had actually set your heart on purchasing the next iPhone in the hope that you would receive some kind of innovative wireless accessory, then you can of course go down the route of purchasing a set of headphones that do work wirelessly. There’s nothing to say you have to use the Apple provided solution.

Check out the video embedded below for yourself and let us know what you think.