Which is even worse, really, because that means Samsung’s Galaxy Surfboard is 100% legit and, unfortunately, it even has its very own Brazilian TV video featuring surfer Gabriel Medina… on a surfboard with a display, because that’s exactly what surfers have been crying out for, isn’t it? 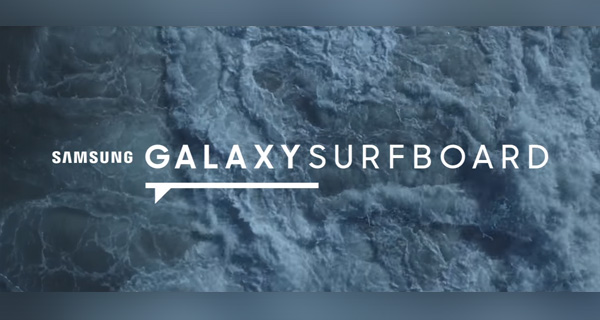 The video showcases Medina riding the waves – is that the right term? – on a Galaxy Surfboard, which appears to be a board that looks just like all the others except with a display and somewhere to slot in the waterproof Galaxy S7, which acts as the brains of the outfit. Samsung’s video shows Medina receiving inspirational messages via the Surfboard, which he can then read and use to, well, surf better, or something.

As one would expect, not everyone is amused, if the comment section under the Samsung Mobile Brazil’s YouTube upload is anything to go by, though most negative comments seem to mistake the smart surfboard for a communications device rather than a training aid, which is what the video claims it to be.

It does look pretty sleek, though

While likely more concept than something that will ever likely appear in your local electronics emporium, Samsung’s video highlights the fact that all consumer electronics companies these days are very much on the lookout for the next big thing, whatever that may be. Some companies are hanging their hat on wearables while others are going the whole hog with virtual reality. Samsung, for its part, has straddled both of those markets itself while going through something of a renaissance in the smartphone world. We don’t foresee Samsung being a force to be reckoned with in the wet world of surfing any time soon, but with this video, it at least reminds everyone that there is more to technology than smartphones and tablets.

We suggest anyone with a spare couple of minutes check Samsung Brazil’s video for themselves, if only because it’s so mental.