Drivers from pretty much every region across the globe are familiar with the frustration which follows tailgating a slower moving truck. On a two lane road, it becomes virtually impossible to overtake the truck without risking running into incoming traffic from the other end, but Samsung is showing us how all of this can be avoided. The company is demoing the ‘Safety Truck’ which carries 4 screen panels at the back showing live camera feed of the road up ahead.

The technology has been introduced by the Korean giant’s Argentinian arm, a country where almost one person dies in a traffic accident every hour, with over 80-percent fatalities related to road accidents, and not surprisingly most of them involve overtaking attempts on two-lane roads. These are startling figures, but Samsung’s technology has the potential to make a marked difference not just in Argentina, but all around the globe. 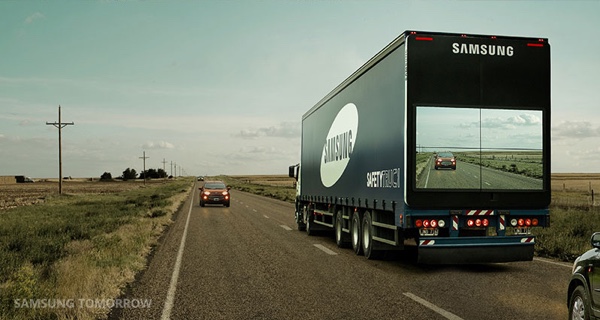 The technology at hand is actually quite straight-forward and no rocket science; it simply involves a camera mounted up front of the truck, feeding live footage of the road up ahead right to the huge screen at the back which has been split into four panels. Not only does this give car drivers at the back a clear picture of any incoming traffic from the opposing side of the road, but can also help identify any roadblocks or hindrances for that matter. The solution is unlikely to be of much value on multi-lane highways for obvious reasons, but can prove invaluable on two-lane roads.

The electronics giant is not saying anything about when it plans to mass release this tech and no clear timeline is being provided for its development either. However, Samsung has said that it’s working in close collaboration with the Argentinian government and non-government safety agencies to develop this tech even further.

For now though, we’re not even sure if Samsung’s solution will actually be mass produced or not. However, the solution at hand could go a long way in reducing overtaking accidents on two-way roads across the globe by a significant percentage, and if Samsung drops the idea, there’s no reason another firm cannot pick up from there.