The age old debate of “iOS versus Android” will never go away. As long as both platforms exist, the debate will simmer away and rage on in the background. But what about if you look beyond the underlying platform and consider the hardware perspective and the experience that it provides? If you had to choose between an iPhone 6s/6s Plus, or a Galaxy S7/S7 Edge, which one would you opt for? We’re going to play devil’s advocate here and run through a number reasons why each device is better than the other. 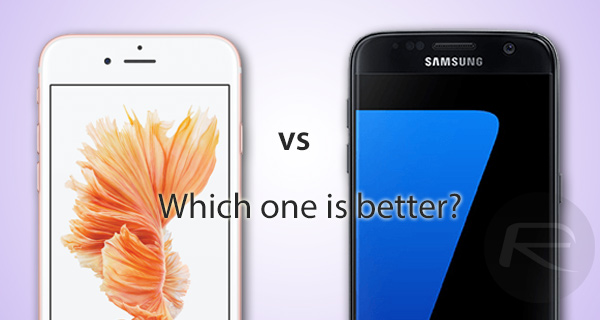 8 Reasons why Galaxy S7 is better than iPhone 6s

Better Camera
Mobile photography is becoming increasingly popular with consumers and smartphone owners. When tested, Samsung’s Galaxy S7/S7 Edge managed to rack up an impressive score of 88 in the DxOMark’s test. That puts the Galaxy S7 series in first place. The test found that the 12-megapixel rear camera offering served up “outstanding exposures and colors for indoor and outdoor use”, making it an extremely capable, and extremely versatile camera offering. Apple’s iPhone 6s Plus finds itself placed at sixth position with a score of 84 while the iPhone 6s is at twelfth position with a score of 82.

Waterproof
It may not be a huge point of content for a lot of us, but it’s already been proven that many, many smartphone fans want a device that offers waterproofing. Samsung’s Galaxy S7 comes with an official IP68 rating, meaning that it’s totally dust proof, and is protected against “prolonged effects of immersion under pressure”. If you want to take a bath with your Galaxy S7, then feel free.

Expandable Storage
This has always been an important feature on many Android tablets and smartphones. Samsung took a little bit of hate for removing the card slot from the previous Galaxy S6 models. The company ultimately bowed to peer pressure and reintroduced the memory card slot into the Galaxy S7 range, allowing for an additional up to 200GB of external storage to be applied.

Edge Version has Edge Display
You could be forgiven for thinking that the gorgeous edge display on the Galaxy S7 Edge model is purely for aesthetic purposes. Granted, it does look stunning on the device, but it also offers very distinct and tangible features to owners of the device. One of the cooler things, which is both aesthetic and functional, is the edge strip lighting that emanates from the edge of the display when a notification is received.

Android’s Customization
One of the beautiful things about Android – and definitely one of the things that catapults it ahead of Apple’s iOS platform – is the endless amount of customization that users can go through with the platform. Android device owners can typically change and adapt Android to suit their own visual and usage needs.

Always-On Display
Let’s not get confused here; “always-on” doesn’t mean that you can’t turn the display off and that it will burn through your battery in minutes. Samsung’s always-on experience on the Galaxy S7 and Galaxy S7 Edge means that users will constantly have visual access to the time & date, as well as any calendar entries that are deemed important at that time.

Quad HD Display
Say what you want about Samsung’s hardware, you really can’t knock the display technology that ships with the Galaxy range. The overall aesthetic and design of Samsung devices has left a lot to be desired in the past, but the beautiful Quad HD display with 2560 x 1440 resolution on the Galaxy S7 range is simply stunning.

More Charging Options
Historical sharing of simply plugging the device into a wall-socket and waiting for it to charge are hopefully long gone. Samsung has embraced the future of mobile charging by ensuring that the Galaxy S7 and S7 Edge offer varying charging options: fast charging, wireless charging, and fast wireless charging for times when you simply can’t connect the device up.

8 Reasons why iPhone 6s is better than Galaxy S7

Pressure-sensitive 3D Touch Display
Apple’s integration of pressure-sensitive display called 3D Touch on the iPhone 6s really is a game changer. Having the option to interact with the display and its underlying content in a new and efficient manner means that owners of the iPhone 6s truly have an extension of multi-touch that can be used in a variety of ways.

Don’t believe us? Check out the video embedded below for yourself.

Fastest Phone in Real-World Performance Tests
This is a big one. Plenty of smartphones on the market come with technical specifications that appear to surpass that of the iPhone 6s on paper. Faster processor, additional RAM, and so on. However, Apple’s marriage of hardware and software means that the company is able to squeeze every last drop of performance out of the iPhone. The real-world performance of the iPhone 6s – which includes launching apps and interacting with multitasking – has been proven to blow the competition out of the water.

Lighter
As above, even the slightest difference in weight makes the whole experience a lot more pleasurable. The iPhone 6s weighs a very agreeable 143g, compared to 152g of the Galaxy S7, and 157g of the Galaxy S7 Edge.

iOS and Updates
The power of iOS speaks for itself. Granted, it can be frustrating living inside of Apple’s walled garden on occasion, but then you consider the premium App Store experience that includes millions of excellent polished apps. Also, most top apps are first released on iOS before they are made available on other platforms. That and the entire ecosystem (iOS + OS X + watchOS + tvOS) that makes it an almost seamless experience to own a range of Apple devices.

What also really stands out is how Apple pushes regular updates for the iOS platform, supporting as many devices as possible and for as long as possible. The biggest example of this is iPhone 4s and iPad 2, released 5 years ago back in 2011, both of these devices get the latest OS updates as soon as all other iOS devices, including the very latest iOS 9.3. Compare this to Samsung’s phones and the two year old Galaxy S5 still hasn’t received last year’s Marshmallow update.

Reversible Charging Plug
This may not seem like a huge feature, but Apple’s reversible Lightning connector solution has saved so much frustration and hassle with users. Not having to find the correct orientation saves a lot of anger. This is in direct contrast to the microUSB option on the Galaxy S7 which was rumored to come with reversible USB-C support back in the day, but that for whatever reason didn’t materialize.

More Internal Storage Options
There’s talk of Apple actually moving across to a SanDisk 256GB NAND flash storage solution for future iPhones, which would seriously impress those looking for large capacity devices. However, in its current form, the iPhone 6s offers internal storage of up to 128GB compared to the 32GB in the U.S. for Galaxy S7, or 64GB if you buy one internationally. Of course the storage is expandable as discussed earlier, but internal storage is much faster compared to a memory card.