The Xbox One and PlayStation 4 are almost ready for the anxious gaming world to enjoy, and with just a couple of weeks to go until both machines hit the retail market, both Microsoft and Sony are currently on the campaign trail to woo gamers. Yesterday, Sony detailed some of the TV and movie apps for PS4 to be available from the get-go including Netflix and Hulu Plus, and today, Microsoft has done the same by unveiling the video apps already prepared for Xbox One early adopters. Catch the details after the leap.

Microsoft has, for a long while now, been trying to morph the Xbox brand from a mere games console into an all-round entertainment system, and with the Xbox One, the company has set its sights on the TV and movie-loving market as well as the hardcore CoD, FIFA or Battlefield fan. At the big reveal this summer, it was clear that the Redmond had pulled out all the stops to ensure that the Xbox One is to replace your set-top as well as your current-gen console, and this announcement of launch-day apps – the so-called "first wave" – contains plenty of familiar faces.

The list is quite extensive, to say the least. Sony has already announced a list of eleven, but Microsoft has really put in the work to ensure as wide a variety as possible. As well as the standard Netflix, Amazon Instant Video and Hulu Plus – all of which will be found on the PS4, there’s also Crackle and Redbox Instant. HBO Go will be arriving shortly after the launch (although not available from the start), while there’s plenty of content from the likes of Fox, CW, ESPN and Univision, as well as Verison FiOS.

International markets will see the likes of Netflix, Lovefilm, Orange and Canal+, and although there’s no YouTube app (as well as the likes of 4oD, ITV Player and BBC iPlayer in the UK), all of these should be accessible via Internet Explorer, so while we’d wait keenly for a dedicated app, it’s not something we should deem as urgent. 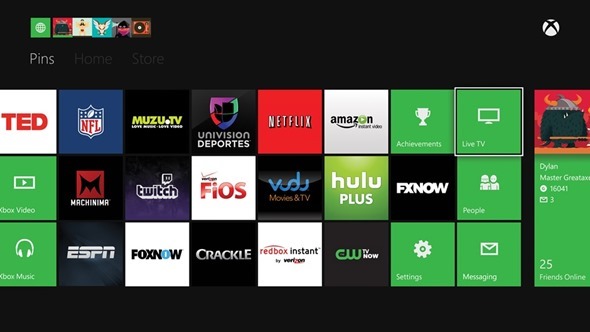 Here’s the complete list of apps divided into regions in which they will be available:

So there you have it, TV-loving folks. The Xbox One contains a very significant list of apps ready for your viewing pleasure. The console costs $500, and will release on November 22nd — a week behind the PlayStation 4.

We’ll be keeping you informed on any vital info relating to either next-gen console, so stay tuned!