This year’s Worldwide Developers Conference (WWDC) is already well and truly on cemented into the diaries of the scores of developers who will be in attendance. Now, thanks to an official release of media invites, it’s also now highly visible to the media and press, with Apple confirming the keynote event to take place on Monday, June 4 at 10:00am Pacific Time.

Apple’s annual conference is targeted at the legions of passionate developers around the world who create apps and services for Apple’s major platforms, including iOS, macOS, watchOS, and tvOS.

The event is also an opportunity for Apple to hold an opening keynote presentation hosted by CEO Tim Cook, which is used to discuss current company performance, plans for the future, and to introduce new items, which typically involves unveiling the next-generation of its iOS and macOS platform. The world’s tech media and press are generally invited to that opening keynote.

Those invites have now been officially released by Apple and currently propagating their way to the chosen few, including us, who Apple regularly asks to be in attendance at the event.

These media delegates will join the thousands of developers who have parted with $1,599 for a WWDC ticket for this year’s event, as well as those 350 who have been chosen by Apple to attend on student scholarships from education establishments and STEM organizations. The event itself will be held at McEnery Convention Center in San Jose, California, which is large enough to host everyone in attendance. 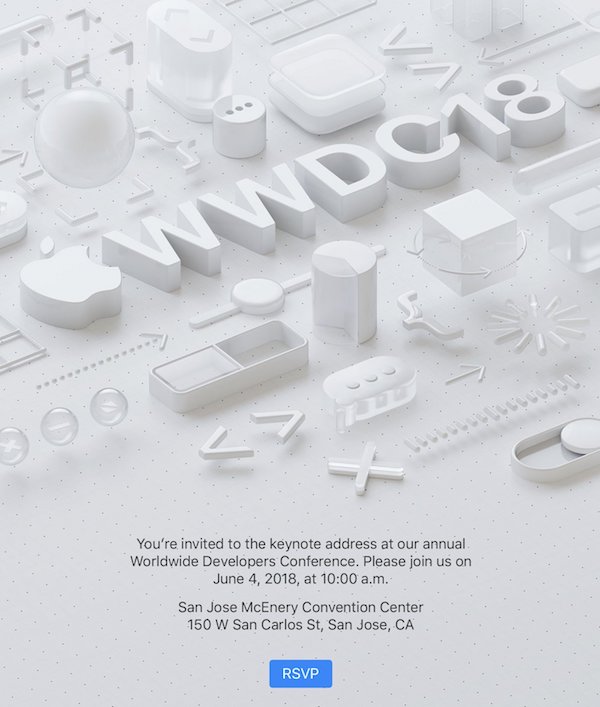 In terms of what’s going to be announced during the opening keynote, it’s almost nailed on that Apple will unveil the first official preview of iOS 12, watchOS 5, tvOS 12 and macOS 10.14. It’s also highly possible that there could be a hardware element to this year’s conference, which could potentially include a refreshed Mac lineup and some new iPads. A lot of analysts and investors are also expecting Apple to actually announce the availability of its new AirPower accessory, which is essentially a Qi-compatible charging mat capable of wirelessly transferring power into multiple Apple devices at any given time.

As is always the case, we will be providing up to date coverage of everything that’s announced at this year’s WWDC in order to ensure that you are kept in the loop and don’t miss out on any of the announcements.