The Winklevoss twins have decided to end their legal battle with Mark Zuckerberg over claims that the CEO/Founder of Facebook stole the idea of the social networking site from them.

It’s a bit of long story, this legal battle. It all started in 2003-04 when Mark Zuckerberg launched TheFacebook. The Winklevoss twins – Cameron and Tyler (Mark’s classmates at Harvard University) – claimed that Zuckerberg stole the idea of a on-campus-only social networking site from them. And so started a 7 year long legal battle which was the basis of the popular 2010 movie The Social Network.

In 2008, the twins settled a cash-and-stock deal worth $65 million with Facebook but later tried undoing the settlement, stating that Facebook hid documents which held important information regarding the value of the company, which, the twins felt, was more than what Facebook showed.

The two then went back to court to appeal against the allegedly unfair settlement, but the appeal was declined in April. The Federal Court stated the deal as being “quite favorable” for the twins.

Today, “after careful consideration” as Reuters reports, the twins have decided not to appear to the US Supreme Court:

Olympic rowing twins Cameron and Tyler Winklevoss have decided not to appeal to the Supreme Court a ruling upholding their $65 million settlement with Facebook Inc and its founder Mark Zuckerberg, signaling the possible end of the long-running dispute.

In a filing on Wednesday with that court, the Winklevosses said that after "careful consideration," they decided not to seek Supreme Court review. The filing did not give a reason for the decision.

The filing announcing the end of the legal battle did not give any reason behind the decision. 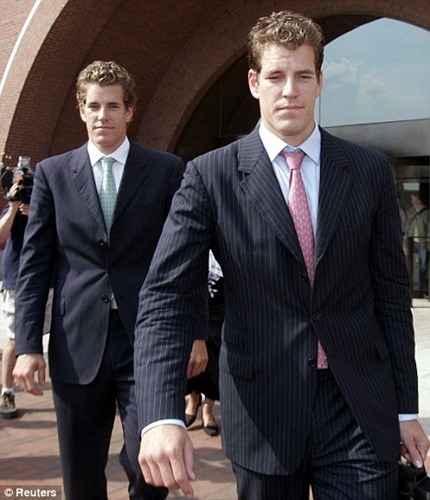 Facebook slowly and steadily gained users until its popularity essentially exploded in 2009. Today, more than 600 million people use Facebook to connect with friends, family and co-workers.

Since the $65 million settlement in 2008, the Winklevoss’ stock is now worth more than $100 million. So that might’ve changed their decision.

Facebook is still growing at an alarmingly fast rate, so their stock worth is only going to increase in times to come. Facebook’s current worth is more than $100 billion.

Facebook commented on the twins’ decision by saying: "We’ve considered this case closed for a long time, and we’re pleased to see the other party now agrees."