The success of the iPhone speaks for itself, spending just a mere five months on Verizon Wireless, it has already stolen the top most position among other handsets on the same network, according to a report from BTIG Research with AT&T sales telling a very similar story. 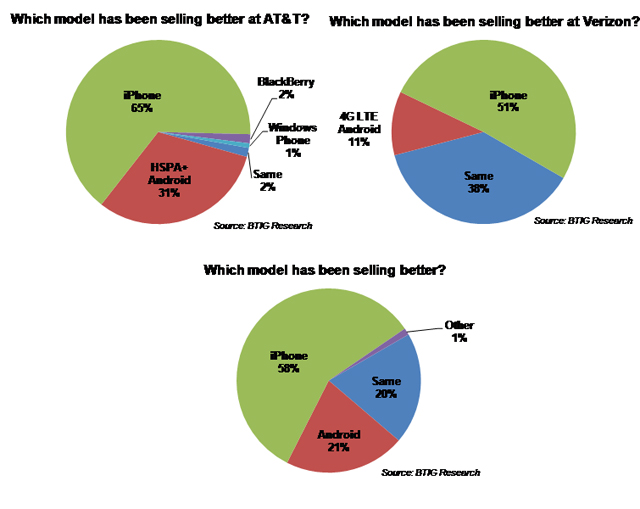 BTIG Research asked 250 Verizon and AT&T stores about their sales numbers over a three week period according to AllThingsD, and it turns out the little phone that could is still, err, doing even though it is about to reach its first birthday after initially going on sale in June of last year.

Of the Verizon stores asked as part of the study, 51% reported that the iPhone 4 is currently their best-seller with a further 38% saying that Apple’s smartphone was in a tie with handsets powered by Google’s Android mobile operating system.

The AT&T numbers are even more impressive.

65% of the stores contacted by BTIG Research reported that the iPhone 4 was topping their charts at the time, and that’s with AT&T customers having had the longest to partake in a spot of iPhone 4 loveliness. At least Verizon could point to pent-up demand skewing the figures but AT&T Android fans have no such excuse.

So all told, 58 percent of the stores BTIG called named the iPhone as their strongest selling phone and an additional 20 percent said it shared that honor with a competing device.

Numbers like those really make you wonder how successful iOS would be if Apple saw fit to launch a fleet of iPhones instead of opting for their current ‘one iPhone fits all’ policy, don’t they? They are also proof that Apple’s ‘antennagate’ scandal doesn’t seem to have affected sales one jot, despite the best efforts of a few tech pundits. You know who you are!

Oh, and no mention of RIM’s BlackBerry in there either, bar a pitiful 2% mention at AT&T. Is that a death knell I hear over yonder?