Will iPhone 3.1 Fix the Battery Woes?

There is no doubt about the fact that iPhone is one of the most popular cell phone out there. The argument for a longer battery life on the iPhone is relative in 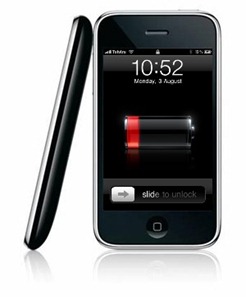 terms of its user requirement. If used as a cell phone, for the primary purpose that it has been designed for, the battery life would be fine and will last probably all day. However, if someone likes to use it as portable computer which I assume most iPhone users are doing, for checking email, web browsing, playing games etc, then the battery is comparable to that of any standard notebook at best.

iPhone owners, unlike other cell phone owners, use more features on a regular basis. Use of these features considerably drain battery life. It’s not fair to blame the new hardware for the quick battery sucking of the new iPhone 3GS. The new design with all its bells and whistles aren’t the main and only culprits. Rather, it’s the software which is the main contributor for drawing the juice from iPhone 3GS batteries much faster than before. While iPhone 3.0 firmware was certainly a leap forward for Apple, with all the new features, there was also a huge disappointment with it, the battery life. Its funny how Apple didn’t add multitasking to save battery life, yet the new update with Push Notification System is doing away with battery faster.

Given due cognizance to the importance placed on improvement of features and styles, it is rather high time for Apple to continue to provide innovative and compelling devices, while recognizing the need for an improved battery strength. Apple has to explore some new battery technology to reduce the charging cycles of iPhone and moreover, needs a relook into the software side of its various applications which are significantly contributing to the excessive discharge. Apple has done hardly anything to provide relief to users to cope up with weak battery life. Moreover, iPhone’s battery is sealed inside, meaning users can’t swap it out with a fresh one while their battery is recharging thereby leaving no option but to be dud till recharging.

Apple announcement of the highly anticipated iPhone OS 3.1 firmware version is expected on September 9th where it claims improvement in the battery life. Let’s see how far Apple fixes the battery issues.