WhatsApp has long been recognized as one of the most popular cross-platform messaging apps in the business, but it can now proudly claim that 1 in 7 people in the world are regular users. Jan Koum – one of the original co-founders and current CEO of WhatsApp – celebrated the achievement by announcing that the messaging service now has more than one billion active monthly users. The user-base which has taken the service past the one billion-active-monthly-users mark is even more impressive when you consider that more than 100 million of those users have joined in the last five months alone.

Having one billion unique individuals accessing your service on a monthly basis is impressive enough, but Koum also took the opportunity to share some additional statistics about how those users are interacting and making use of Facebook-owned WhatsApp. Those one billion active monthly users manage to send more than 42 billion messages each and every day. Those messages contain approximately 1.6 billion photographs, and 250 million video files. There are currently 1 billion group conversations going on across 53 supported languages.

Of course, WhatsApp as a service and company has had to grow to fall in line with the valuation placed on it by Facebook and to best support those people using the service day-in-day-out. That support infrastructure has grown to a total 57 WhatsApp engineers, with Koum also sharing that the company is hiring more due to the demand placed on the service. All in all, it’s been a fairly impressive few days for Facebook after having yet another app to surpass the one billion-active-users mark, as well as posting impressive growth during its Q4 2015 earnings call. 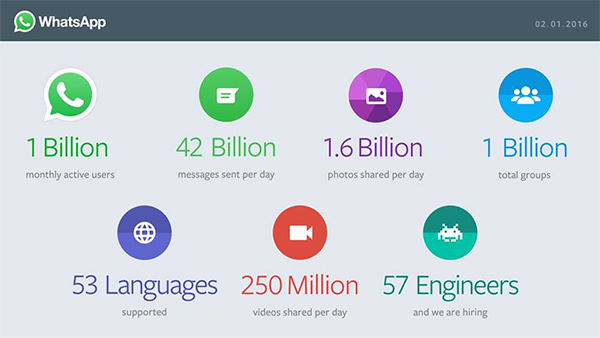 Facebook paid approximately $16 billion for acquiring the WhatsApp platform back in 2014. At that time, the messaging service was used around the world, but had approximately 450 million active monthly users. Facebook’s influence has been pretty much immediate. The service has managed to more than double the amount of individuals using the service in the time since the acquisition. Mark Zuckerberg’s company has also entirely removed the $1 annual subscription fee that users were required to pay after an initial twelve months of free use. It’s likely that the platform will be monetized in other ways going forward.

Facebook’s main mobile app has more than 1.5 billion active monthly users. Is it only a matter of time until WhatsApp surpasses that?