Watch: Here’s What Happens When You Pour Gallium Over An iPhone 6 [Video]

Sometimes science is just plain awesome, and today is one of those times. The reason for that is a YouTube video that we stumbled across which shows something called gallium being used to destroy an iPhone. Sounds fairly mundane, right?

First off, what exactly is gallium? We’re glad you asked, because it’s an element, which carries the atomic number of 31. In fact, it seemingly doesn’t even exist in its free form in nature and is found as a compound in a lot of cases. 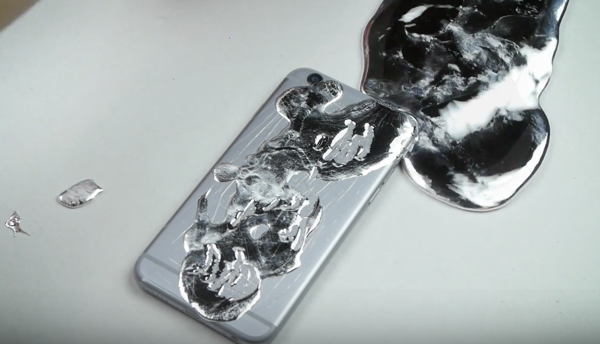 If that doesn’t answer your question, all you really need to know is that gallium likes to get a little too close with aluminum, with the end results being generally pretty catastrophic for said aluminum. And you know what iPhones are made of, don’t you?

So armed with that knowledge and some gallium, YouTuber TechRax decided to pour some of it all over an iPhone 6. For a while everything seemed just fine, but as it will become clear when watching the five-minute video, things are far from fine. For starters, the gallium starts to take the iPhone’s rear aluminum shell with it when it is removed, leaving the smartphone’s insides exposed. Unsurprisingly the iPhone starts to get a little upset about having its innards meddled with and gives up the ghost, but the video’s job is already done by that point. If you didn’t know what gallium was before watching it, you sure do now!

The iPhone 6 has been subjected to all manner of strange things since its arrival in September last year, with it being shot, driven over and generally mistreated to the nth degree. Its older brethren didn’t fare much better, with iPhones having been blended on more than one occasion over the years. It just seems some people like to break expensive technology, whether anyone likes it or not.

And so ends today’s lesson.

Take a look at the video below and be sure to grab a beverage while you’re at it, so you can fully absorb the entertainment value of the whole thing at least.