Along with Project Ara, Project Glass, and all of the other exciting innovations that Google has going right now, the company’s Advanced Technologies and Projects (ATAP) team also took the wraps off Project Tango back in February. The aim of Project Tango’s mapping technology is to allow common devices such as smartphones to perceive space, objects and movements in the manner that humans do, and in order to really test the resolve of its emerging invention, the Mountain View-based company has teamed up with NASA for some zero-gravity testing.

The purpose of this test, besides clearly having lots of fun, was to see how Project Tango’s various sensors would react in an outer-space situation, and although the experiment didn’t quite take Project Tango into outer space, NASA simulated the experience, allowing Tango to map using its own SPHERES robotics. 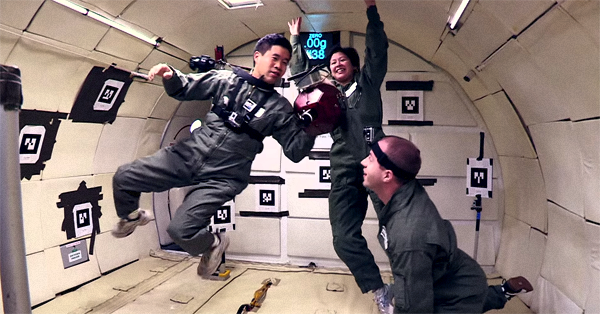 The result, as you’ll see from the video clip below, is something to savor, and even though most of us are wowed by space anyway, it’s also intriguing to see the progress that is being made as far as Project Tango is concerned. Apparently, it’s able to work its magic in zero gravity, and given the adventurous nature of the Advanced Technologies and Projects team over at Google, the most exciting revelations are almost certainly still to come.

With Tango, Ara and Glass all being worked on simultaneously, Google is hedging its bets as far as the next big innovation in tech is concerned. Glass has, quite literally, caught the eye of technology fans far and wide, while the modular smartphone Project Ara, which launches next January, could completely alter the way in which we go about upgrading our handsets.

But with Project Tango, the search giant is truly attempting something truly remarkable by breaking the boundaries, and if, given significant development, smartphones could fathom space and motion in a similar manner to which their owners already do, the list of possible uses and benefits is endless. Just imagine what you can do with it once you get your greasy paws on it!

Anyway, before we get a bit too carried away, be sure to check out the video below of Google’s collaborative effort with NASA, and as ever, make sure you leave your thoughts and comments via the usual channels!