With so many innovative products out there intended to help you keep your treasured devices free from the scrapes, scratches and bumps that they may encounter on a daily basis, it’s little wonder that the makers of these cases and covers are short on ideas for unique sales pitches. A company by the name of Sir Lancelot’s Armor launched an interesting product this week in the form of the Holy Grail – an iPhone case comprised of bulletproof glass – and although it was never stipulated that the film would itself be bulletproof, the guys over at Ars Technica couldn’t resist putting it to the test.

There’s no shortage of videos out there showing off what happens to our beloved tech gadgets when they find themselves in the firing line, but unlike other clips, this experiment from Ars has a degree of investigative merit. After all, it’s only natural that if something claims to have been made out of bulletproof material, we’d want to see if it can actually hold its own against a bullet, but on this occasion, it turns out that Sir Lancelot’s Armor doesn’t quite reach the heights. 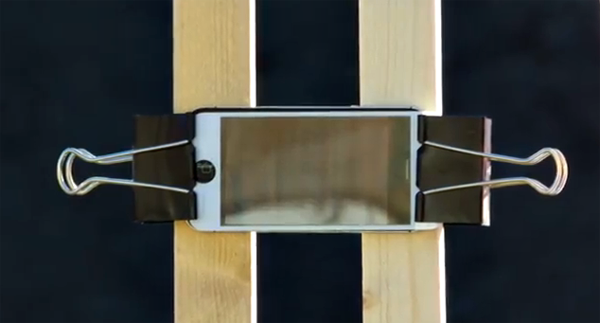 Having attacked the screen protector with a screwdriver and run it over with a car on an old iPhone, the guys at Ars found that the case was indeed very robust, but having mounted an old iPhone 4 at a shooting range, the resulting mangled mess of a device left over suggested that, when the bullets start flying, the Holy Grail might as well not be there at all.

Being credit-card thin, it was never going to fend off an actual bullet, and while, at a certain thickness, the Holy Grail may well be bulletproof, it’s not cut out for front-line warfare.

Nevertheless, as Ars Technica’s earlier tests demonstrated, the Holy Grail is more than up to the job of protecting your iPhone against more common issues like scratching and accidental trampling from a car tire, and so while its bullet-stopping credentials mightn’t be up to much, it still looks a very good acquisition for those who want to keep their device adequately protected against the elements.

Check out the video of the gunshots below, and be sure to leave your comments via the usual mediums!