Richard Ryan, the self-proclaimed “Tech Assassin,” regularly delights us with some epic footage captured while shooting up some of the technology industry’s most revered and celebrated gadgets. One of his more recent clips sees an Apple iMac come face to face with an anti-tank rifle, and even though the result is somewhat predictable, it’s easily the most epic way to finish off an unwanted machine.

Ryan’s RatedRR channel is hugely popular, and while he often performs some potentially useful durability tests, the real show piece is always the bit where the arsenal comes out. 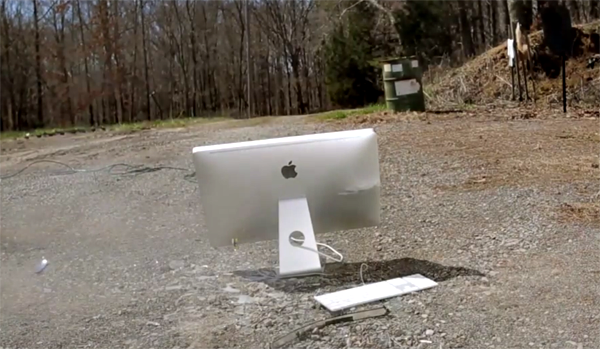 The Finnish-made rifle in this particular clip is no toy gun by any measure, and even though most of our modern-day gadgets simply don’t offer the surface area to showcase this bad boy’s might, the pre-2012 iMac was a prime candidate to experience the full, unforgiving wrath of this monstrous piece of artillery.

Sure, the iMac took a bit of a hiding, but in actual fact, didn’t come off quite as badly as one might have imagined. The 20mm bullets, which Ryan speculates are probably decades old, did a bit of a number on the device, and given that it was in full working order prior to the test, was duly written off once after a few shots from the beast.

I have to say that, before I watched the clip, I did think the iMac would be blown into a million pieces and wind up as a pile of obliterated metal. But while the damage is evident and most of the internal components were hit badly, it manages to maintain its form even once the show’s over.

What would have been awesome is if the FaceTime camera on the front of the iMac was competent enough to record a slow-mo video of the bullet, and stream it to an external source for live, point-of-view coverage of its obliteration by a powerful round. Nevertheless, as ever, Ryan serves up this installment of tech warfare from a variety of angles, allowing the firearm fanatics among you to see the impact from all manner of aspects.

Check out the video below, and as ever, be sure to let us know what you thought by dropping us a comment.