Virtual Desktops are an integrated feature of OS X and Linux, but have always been an add on functionality in Windows. Windows XP had a powertoy for this, but for Vista there hadn’t been anything available till now, from the Microsoft Sysinternals team. Does it stand well against the competition? Read on for more! 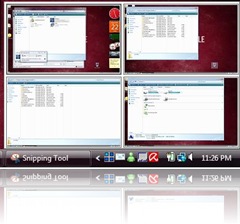 Microsoft’s Sysinternals team has just released a virtual desktop tool Desktops weighing at just 116 KB. It’s very light on resources and also on features. It uses a different way of creating virtual desktops than other virtual desktop applications which wont let you run a huge number of applications including FireFox, Vista’s Snipping Tool and others in the virtual desktops, which makes it just a gimmick rather than a useful utility. Multiple instances of explorer.exe are created as well as several other processes which all just end up hogging your system.

Also, Aero Glass is turned off in the Virtual Desktops which makes it the worst Virtual Desktop utility out of the lot. Hovering over the system tray icon gives you a preview of the desktops which isn’t real time either, which makes you wonder what the heck were Sysinternals thinking when they made Desktops, which can’t even tap the full potential of Vista!

These are some of the issues which annoy people when there own developers aren’t tapping the true potential of the new API’s provided with Windows Vista, even the Windows Live Messenger is going to be updated soon with WPF goodness. 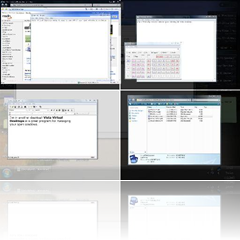 If you want to see Vista’s DWM’s ( Desktop Windows Manager ) true power, Virtual Desktop Manager is the best free choice for Vista users. It provides you with an Expose like view of all your workspaces as well as a real time preview. And just like Desktops it also shows a preview on system tray icon mouse over. But it’s extremely fast. It runs Aero Glass in all Virtual Desktops, as well as shows real time previews. It also has a center screen notification system which pops up to show which virtual desktop you’re using. Here’s a brief over view of the features.

Another notable feature is that you can drag a window from one workspace to the other using the Expose style previews, which really makes it rock. The only issue is the lack of 64 bit support so far, which is planned for version 1.0 which would be the next version. Plus the minimize and maximize animations didn’t work correctly while testing it for this review. But apart from these issues it’s a great utility.

If you use Virtual Machines to run other OS, or you just want to be more organized, than VDM is highly recommended!

You might have seen the cool videos on Youtube demonstrating the power of Compiz Fusion on Linux. One of the most popular effects of Compiz Fusion is the desktop cube, which puts all the virtual desktops on the sides of a cube that can be rotated in 3D. CubeDesktop does that for Windows Vista and XP.

CubeDesktop™ helps you to reduce clutter and better organize your windowed applications by providing up to six virtual desktops which you can manage using innovative 2D and 3D effects.

Along with the Cube Effect. it also provides several other views, which are also present in Compiz Fusion, such as water ripples, windows exposer, 3D desktop flip, Carousal effect and Desktop explorer effect.

We would have loved the 3D windows effect of Compiz Fusion which makes the Windows pop out from the desktop but it isn’t there sadly. And neither does Video play correctly when using any of these views unlike in Compiz Fusion. Also when compared to VDM, it doesn’t have such features too, like the drag and drop of windows from one virtual desktop to the other.

There are 2 versions, a basic free one with only the 3D cube view and a pro version with all the views available. So, if you’re interested in eye candy, try the basic version to see if you like it. It does wear off shortly though as it’s nothing like how Compiz Fusion is integrated into Linux so if you’ve used that you wont be satisfied with Cube Desktop.

For this round up, we declare VDM the clear winner. It’s free, light on resources and works great. Plus its source code is also available which is a great plus if you’re a developer.