Video: Watch Kids React To The First Ever iPod

Isn’t it amazing how quickly technology progresses and changes without us even really realising it? The latest ‘Kids React’ video does a really perfect job of showing just how far technology, and in particular Apple’s personal music player the iPod, has changed since 2001. It doesn’t contain an internal speaker. It doesn’t have a multi-touch display. It doesn’t have the App Store. Watch this group of kids react to the madness and confusion that is the original Apple iPod.

The weekly ‘Kids React’ YouTube series sees a group of 5-14 year old children serve up the raw and honest appearance that only the innocence of youth can provide about trial videos, politics, movie trailers, consumer technology products and much, much more. We’ve already seen the kids reacting to Apple II and Apple Watch. Now it’s the turn of Apple’s first iPod to be given the adolescent treatment. 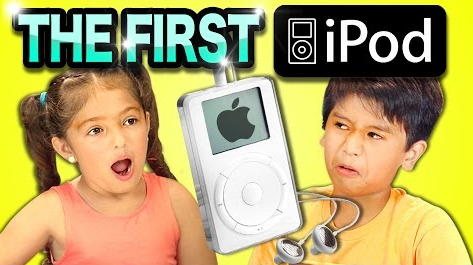 After originally being debuted in 2001 by Steve Jobs, and given the fact that the majority of these kids are under the age of 14, it’s actually extremely possible that these kids have not only never ever used the device that revolutionized personal music, but probably haven’t seen one other. Descriptors such as “it’s the grandfather of the iPod”, “It’s kind of like a phone but it plays music”, “it’s like a cinder block”, and “it’s bigger and I know older technology is big” are all used by various kids in the video to describe one of the most iconic pieces of consumer technology to be released this millennium.

You really have to watch the seven minute video in its entirety to get a true appreciation of just how alien this device seems to be to these little kids. What’s also actually really interesting about the video is how well Apple has done over the years of establishing a brand and getting into the mind and hearts of people of all ages. Without actually knowing initially what the brick-like device is, some of the children are able to come to a fairly educated conclusion based on the shiny back of the device and the Apple branding.

It may not have a speaker. It may not run third-party apps and games. It may not even come with touch-screen navigation or Siri, but it does have that awesome click wheel that we all remember and it certainly succeeded in revolutionizing the personal music industry.