Computing has come a very long way during the course of the last 40 years, while products like the MacBook Air would have seemed virtually unthinkable even a decade ago. Such is the stronghold that the Digital Age has upon us that everywhere you go, you’re likely to see kids barely out of kindergarten rocking iPhones and iPads, but how would these touchscreen-loving youngsters cope with an antiquated monstrosity like the Apple II? The result, as the video below shows in its entirety, is quite amusing, with most of the children clearly bamboozled by the raw, command-line computing of yesteryear.

Nowadays, we don’t just expect things to work immediately, perfectly, and every time. We also demand that apps look pretty, with clean, modern, “minimal” interfaces that are easy on the eye as well as functional. This mentality has definitely rubbed off on the younger generation, and while some of our readers be old enough to remember the old Apple II, you feel as though most of the kids in this particular video have never even been subjected to old fashioned desktop computing. 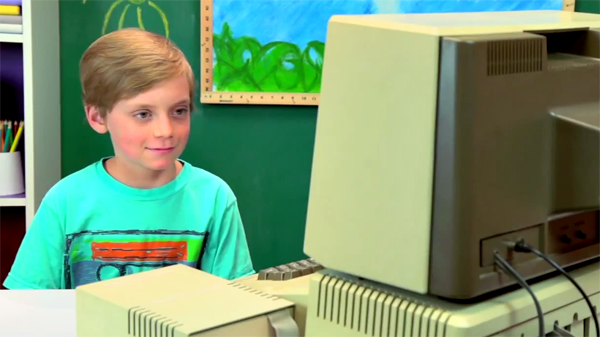 TheFineBros, a very popular YouTube channel boasting in excess of 8 million subscribers, tasked a bunch of kids to accustom themselves with the Apple II, including its various peripherals and media. From mistaking the Apple II’s floppy disks for “CDs” to describing the computer’s lack of a hard drive as “horrible,” it’s a hilarious insight into the progress of technology through the eyes of children, to the point where previously-ubiquitous computing elements are now relics unrecognized by the tech-loving masses.

Some of the children managed to make progress with the Apple II, but the consensus seemed to be one of general disliking for the arduous steps involved in achieving almost anything. In today’s world, we’re very much spoilt by comparison to what was achievable some years ago, and this point is entertainingly emphasized through the video.

A personal highlight for me was, after playing a very basic game, one girl reflecting that “at least it was better than Flappy Bird!”

Check the video out below courtesy of TheFineBros YouTube channel, and be sure to leave your comments via the usual mediums!

Would you be able to use an Apple II in the first go if it was exposed to you all of a sudden?