The younger generation today has quite the knack for getting up to speed with consumer technologies, and where the iPhone is typically a household name, it would be interesting to see what kids have to say about the new Apple Watch – having never come across one, let alone used one. This video on YouTube catches the reactions of kids as they’re shown the actual Apple Watch in the flesh.

TheFineBros have become popular since they started rolling out reactionary videos which were typically drawn on a well set formula. Where the SOP has been to show the younger lot something pretty old, and the older generation something new and current, the producers have changed it up a bit this time around, much to some kids’ relief as is evident in the video. 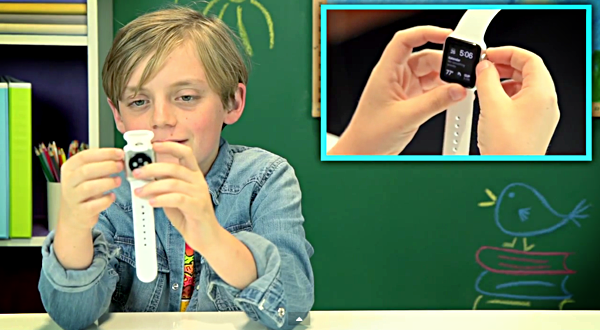 Kids are shown the Apple Watch, with most of them having no clue that this connected wearable is Apple branded. Though the reactions were one of instant excitement, it was interesting to see them talk about what the watch’s purpose was and what they thought it offered. It was all candies and marshmallows till the kids were told that the Apple Watch does require the iPhone for a majority of its functions. One kid called it as he saw it “That’s just dumb,” followed by another kid saying that “it’s kind of disappointing that you have to have a thing with you to make it work.”

While some of the kids thought that receiving calls and text messages on the watch was pointless given that you would have the iPhone right there in your pocket, it was abundantly clear that the kids found this device pretty cool, with a majority of them expressing their desire to buy one. Speaking of buying one, they were told about the gold Apple Watch Edition costing $10,000 and above to which one kid reacted, “This is just as good as the solid gold one”.

Interestingly, one of the kids referred to the Apple Watch as an “accessory” to the iPhone, when asked if the watch was going to make some serious inroads and be the hit that Apple intends it to be.

Check out the video below and let us know what your views are on the Apple Watch in the comments section!