Google’s Android Wear has been designed in a way that suits the search giant, and as such, products like Apple’s iPhone are not officially supported. This will probably change at some point in the future as the watch-tailored version of Google’s platform matures, but for the time being, any integration between iOS and Android Wear takes quite a bit of effort and, usually, a jailbreak. One developer has managed to get Android Wear answering iPhone calls without the intervention of a jailbreak, though, and with a demonstration video also supplied as proof, we get, perhaps, a preview of how Android Wear and the iPhone may eventually interact.

Sharing his work via YouTube, developer MohammadAG has managed to get Android Wear answering calls by utilizing the Apple Notification Center Service, or ANCS, which allows Bluetooth peripherals access to certain notifications. In essence, the iPhone recognizes the smartwatch as a Bluetooth headset, permitting the call-answering feature and conveniently, the display shows you who’s calling without you needing to extract your phone from your pocket. It is important to note that this does not allow you to answer phone or make phone calls directly on watch like Apple Watch does due to lack of microphone+speaker support in Android Wear. 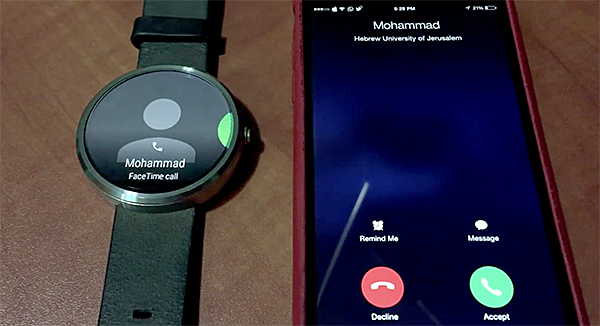 It’s always great to see cross-platform interaction of this nature, and according to reports, Google may unveil iPhone support for Android Wear at its I/O developer conference toward the end of May. With that said, it seems fairly probable that most Android Wear users will stick with Android devices and vice-versa, since even if Google does offer support in an official capacity, using Android Wear with iPhone is only ever going to be half-baked compared with Android-Android Wear.

Still, the fact that an Android Wear device can, as demonstrated, answer a FaceTime voice call, is certainly quite exciting, and with the utilization of ANCS, it doesn’t even require the assistance of a jailbreak.

MohammadAG makes no secret of the fact that in this particular clip, his iPhone is visibly jailbroken, although he does insist that it is not a prerequisite to getting this hacky little feature up and running. Instead, it seems that an APK is installed on the Android Wear device, and while he may release this to the public, it apparently “needs a bit more work” before it can be rolled out.

Anyway, check out the video, and as ever, do share your thoughts below.