Having finally showcased the Galaxy Alpha smartphone earlier on this week, the next major release from Samsung will be the Galaxy Note 4. Set to be unveiled at the confirmed Unpacked event in Berlin on September 3rd, the phablet will apparently pack a sharper, quad-HD display among a number of other improvements and perks. In order to ramp up hype in China for the next-gen handset, the Korean company has released a teaser trailer, with reports also suggesting that posters relating to the forthcoming device have also begun cropping up around mainland China.

With just a few weeks left before we finally clap eyes on the Note 4 in an official sense, Samsung has rolled out a rather heart-warming ad on its Chinese media blog, showing how families can be brought together through the features found on the device. In short, a kid settles the differences of squabbling parents by drawing them a cute, S Pen-aided picture, and given how much money Samsung throws into its juggernaut of an advertising machine, we’ll surely play witness to a slew of subsequent ads in the coming weeks. 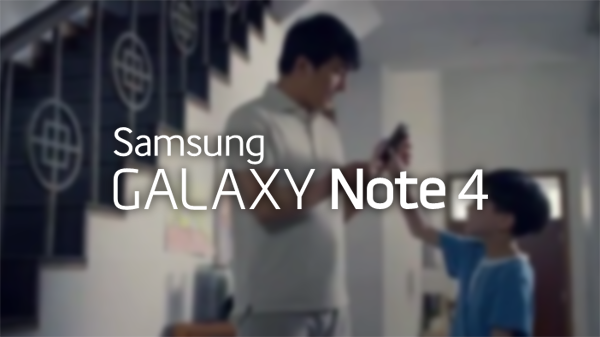 Although the Galaxy S5 is inarguably Samsung’s flagship, the Note has continued to attract consumers in search of a high-end, ‘pro’ performance on a larger-displaying device. With Apple said do be prepping an iPhone 6 boasting a 5.5-inch option, it’s perhaps more crucial than ever that the Note 4 delivers the goods, and from what we’ve heard, it’ll be a worthy successor to last year’s Note 3.

As well as the aforementioned 1,440 x 2,560 QHD display, which will remain the same size as that of its predecessor at 5.7 inches diagonally, the Galaxy Note 4 will apparently be powered by the Qualcomm Snapdragon 805 processor clocked at 2.7 GHz. The rear-facing camera is said to be a 16-megapixel offering boasting optical image stabilization (OIS), and if it’s the same shooter that Sammy bundled into the Galaxy S5, then we’re in for a real treat.

With 3 gigs of RAM and 32GB of on-board storage, the Galaxy Note 4 will be a true powerhouse, and although the design will remain largely unchanged from the typical Note aesthetic, fans of this unashamedly powerful series are unlikely to care one bit.