If you have a security PIN or passphrase on your iOS device, then you are at least at the start of the road toward keeping your data nice and secure. One step that you could go further, however, is to activate the feature that will automatically lock out a device if the security credentials are entered incorrectly a specific number of times.

This has its own problems, though, as one user in China has unfortunately discovered.

According to a report by the South Morning China Post, a mother gave her toddler her iPhone to watch some videos on. Unfortunately, she then came to her iPhone herself and was informed that it had been locked for a total of 25 million minutes or roughly 47 years. As per the security features implemented by iOS, every time an incorrect passcode was entered, the phone would lock itself and force the user to wait a longer period of time.

Amazingly, apparently the only response the woman received from the Apple Store in Shanghai was to either wipe the device and start afresh or wait it out for another 47 years before she could then enter her passcode again.

It’s unknown whether the woman has an iCloud or iTunes backup in place, but we suspect even if she didn’t, starting all over again with a clean phone is a better bet than waiting it out! 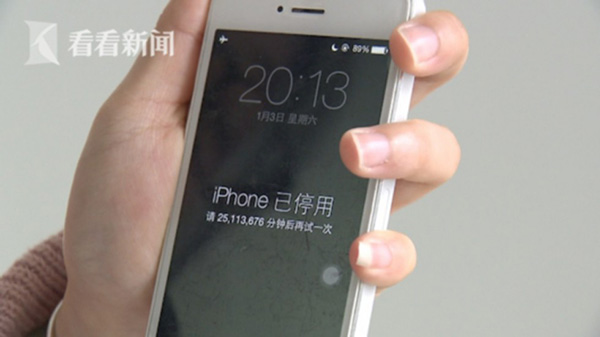 While this all sounds rather farcical, it does make plenty of sense. Apple should not be able to bypass such locks and in this case, it would appear that this is indeed the case. We shouldn’t expect our devices to be secure when we want them to and not when we don’t. According to Apple Store technician Wei Chunlong, she has seen cases where an iPhone has been locked for up to 80 years.

Amazingly, this whole incident apparently happened back in March, and the user in question is still to gain access to her iPhone.