T-Mobile Data Stash Allows You To Carry Unused Data Over To The Next Month, Details Here

In a move that managed to raise many eyebrows, T-Mobile has thrown in an industry-challenging data rollover plan for its 4G LTE users. The initiative – Uncarrier 8.0 – is T-Mobile’s attempt at shaking up the industry, and with the new ‘Data Stash’ feature which basically allows users to carry over unused data over to the next month’s bucket, it looks well poised at doing so.

No other cellular carrier has ever been this brave before, however it would still be too early to call T-Mobile’s move as a complete success, but surely it will resonate well with more budget conscious consumers. According to John Legere, president and CEO for T-Mobile: “Americans have been gamed by the carriers into buying huge data plans – all to avoid getting screwed with overage penalties. Only to find out they bought more than they need which is then confiscated by the carrier. For the consumer it’s lose, lose.” 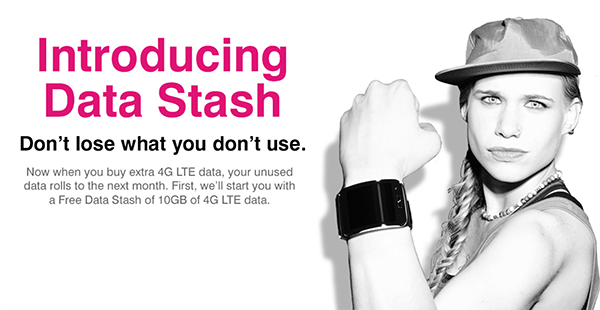 Painting an analogy to describe the U.S. wireless industry’s take on data plans, Legere said “Can you imagine your gas station siphoning unused gas from your car each month? The US wireless industry is even worse.”

To get things into gear, existing and new T-Mobile users will be getting free 10GB data as well – probably an incentive for consumers to move, or even stick to the carrier. However this 10GB or what’s left of it by the end of the month, will not be rolled to the next month, only the data you paid for will be carried over. Users will be allowed carried-over data for up to a year only, which is pretty fair if you think about it. That said, users enjoying the 200MB free Data for Life subscription for tablets are not eligible to avail this offer.

Who is eligible though? Anyone with a postpaid plan and has purchased 3GB or more of additional data for smartphones, and 1GB or more for tablets, will be eligible for the new offer as T-Mobile begins rolling out the new Data Stash features for free coming January 2015.

T-Mobile continues to be called out by many aching customers for its poor coverage and weak networks across the U.S., so as I mentioned earlier, T-Mobile may be shaking things up a bit, but we will have to see if that shake-up actually translates into consumer confidence.