Apple CEO Tim Cook is doing the rounds in Germany and France and he’s been talking about the iPhone 11 as well as Apple TV+. According to Cook, Apple was purposeful when it launched the iPhone 11 as its main product, with the iPhone 11 Pro placed above it in the product line.

Cook said that Apple prefers to keep prices low, which is something most Apple detractors certainly wouldn’t agree with given the premium price it charges for many products and accessories.

We always try to keep our prices as low as possible, and fortunately we were able to lower the price of the iPhone this year.

Cook then moved onto Apple TV+, saying that he doesn’t believe that the competition will fear Apple. And importantly, he doesn’t think that Netflix needs to lose in order for Apple TV+ to win, either.

I do not think the competition is afraid of us, the video sector works differently: It’s not about whether Netflix wins and we lose, or if we win and they lose. Many people use multiple services, and we are now trying to become one of them. 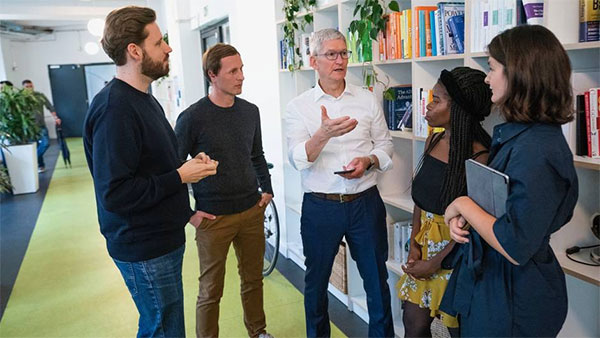 Apple TV+ launches next month for $4.99 per month, although users will get it free for a year with the purchase of a Mac, iPhone, iPad, iPod touch, or Apple TV.

Many have wondered whether users are beginning to suffer from subscription burnout, but Cook clearly believes that users are more than happy to pay for multiple TV services in order to get the content that they want.

Now it’s over to Apple to make sure that content arrives.