Apple CEO Tim Cook has delivered the commencement address at Stanford University following his speech at Tulane University last month. During the speak Cook spoke of digital privacy and more.

Those into their Apple history will remember that Apple co-founder Steve Jobs also spoke at the same school 14 years ago. 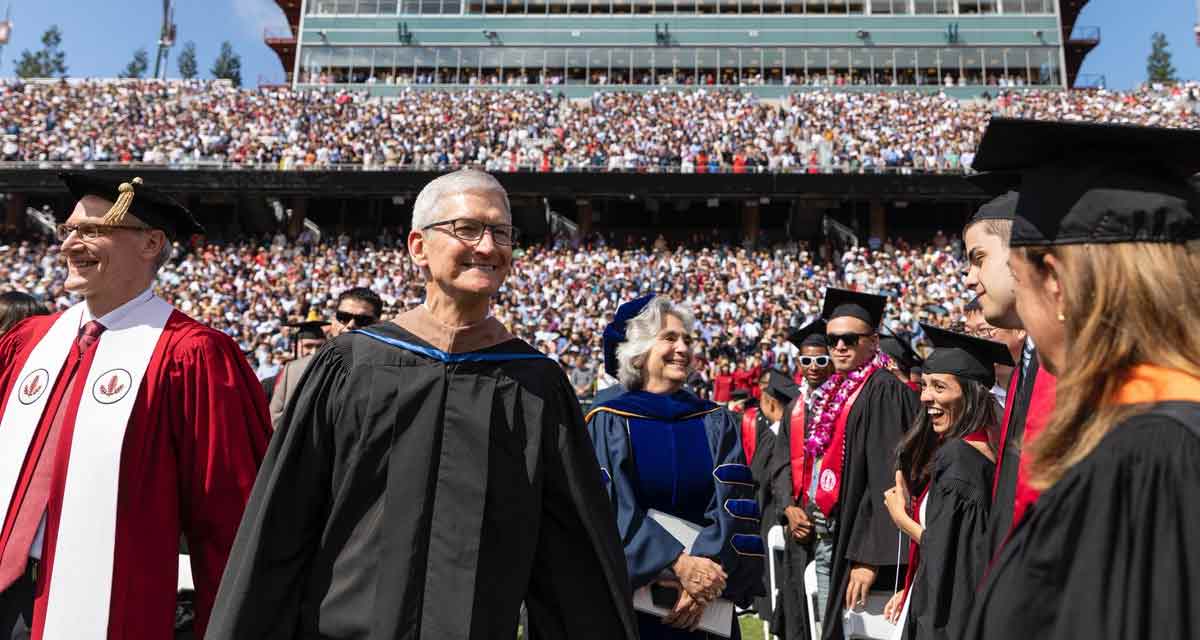 Cook took the opportunity to reference that speech, saying that despite the fact that Stanford and Silicon Valley are intertwined, current times “demand some reflection”.

Stanford and Silicon Valley’s roots are woven together. We’re part of the same ecosystem. It was true when Steve stood on this stage 14 years ago. It’s true today and presumably it will be true for awhile longer still. The past few decades have lifted us together. But today, we gather at a moment that demands some reflection.

Fueled by caffeine and code, optimism and idealism, conviction and creativity, generations of Stanford graduates – and dropouts – have used technology to remake our society. But I think you would agree that lately the results haven’t been neat or straightforward. In just the four years you’ve been here at the farm, things feel like they’ve taken a sharp turn. Crisis has tempered optimism, consequences have challenged idealism, and reality has shaken blind faith. And yet we are still drawn here. For good reason; big dreams live here as do the genius and passion to make them real.

Congratulations to the Stanford Class of 2019! It was an honor to celebrate with you today! 🎓 Be different. Leave something worthy. And always remember that you can’t take it with you. You’re going to have to pass it on. #Stanford19 pic.twitter.com/GwW5UHslXD

Cook referenced Jobs specifically, speaking about his feelings after the former Apple CEO passed away. Cook was close to Steve Jobs, and the loss was particularly hard on him. As it was much of Apple’s leadership.

When Steve got sick, I had hardwired my thinking to belief that he would get better. I not only thought he would hold on, I was convinced down to my core that he’d still be guiding Apple long after I myself was gone.

Then one day he called me over to his house and told me that it wasn’t going to be that way. Even then, I was convinced he would stay on as chairman. That he would step back from the day-to-day, but always be there as a sounding board. But there was no reason to believe that. I never should have thought it. The facts were all there. And when he has gone, truly gone, I learned the real visceral difference between preparation and readiness. It was the loneliest I’ve ever felt in my life by an order of magnitude.

It was one of those moments where you can be surrounded by people, yet you don’t really see, hear, feel them. But I could sense their expectations. When the dust settled, all I knew was that I was going to have to be the best version of myself that I could be. I knew that if you got out of bed every morning and set your watch by what other people expect or demand, it’d drive you crazy. So what was true then is true now. Don’t waste your time living someone else’s life. It takes too much mental effort; effort that should be dedicated to creating or building.

Tim Cook’s full Stanford commencement speech can be seen on YouTube, and running at more than 17 minutes it’s a good watch. Cook speaks well about many things, and it’s interesting to see him away from the Apple keynote limelight.