5G is steadily starting to gather pace, and UK carrier Three has joined the fun after it announced its own 5G plans. The carrier says that London will be its first city rollout in August, with a further 25 cities coming online by the end of 2019.

As is so often the case, there’s a catch. Three says that those looking to pick up some new 5G hotness at the London launch will only be able to make use of the hotspot service available for home users.

This means there will be no smartphone SIMs available, which is a bit of a bummer.

Three is instead hoping that the rate at which people move home in London will allow its mobile broadband offering to be popular, with 5G speeds comparable to high-speed fibre connections. According to a report by CNET, Three is pretty confident in that.

The network’s home broadband will be available only to Londoners at first, and will consist of a plug-and-play router solution. Three claims speeds will be comparable to fibre broadband.

As well as offering better speeds, 5G will bring a host of other benefits to customers, including more consistent coverage in busy areas. 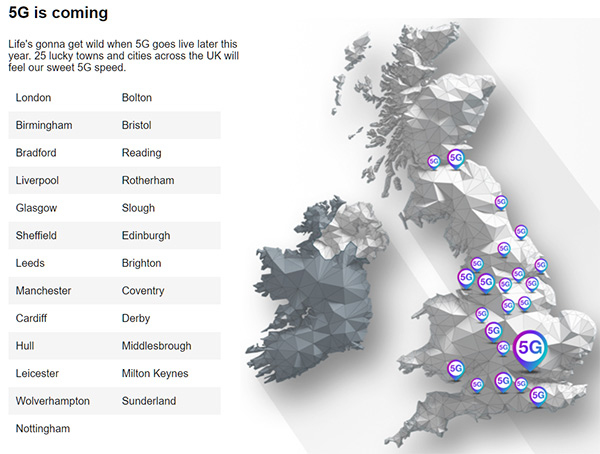 None of this is coming cheap for Three. While it isn’t saying which cities will be part of that magic 25, nor exactly when any of this will go live, Reuters says that this whole shebang is costing Three upwards of £2 billion or around $2.55 billion.

“We have worked hard over a long period of time to be able to offer the best end-to-end 5G experience. 5G is a game changer for Three.”

Three literally made its name by offering super fast 3G connections years ago, and it continued that with 4G connections despite EE offering faster speeds for many. It will be hoping that the arrival of 5G will see that huge amount of money well spent.