Over the course of the last six months or so, active developers in the jailbreak scene have paid particular attention to modifying, extending and enhancing the way notifications are handled on an iOS device. This focus has generally come from the fact that Apple added things like Notification Center in iOS 5, and changed the way notifications are displayed to the end user by adding a non-intrusive banner alert system.

A number of the available banner-based tweaks that currently exist in Cydia offer users the ability to amend certain elements of the notification experience, but the new Chip tweak sees itself as a package that integrates all that functionality into one extension and then adding a little bit more for good measure. The thing that is likely to set Chip apart from its counterparts is the deep integration which it offers within the notification system within iOS, giving it the ability to customize nearly every aspect of the experience.

So what exactly can users expect from a commercial tweak that is trying to make its name as the new kid on the block? Well, Chip certainly seems to be built on a well thought out plan by the developers and offers the ability to change the majority of the visuals that users see when a banner-type notification is received. On top of that, Chip has built-in support to allow users to alter the sound that is played when a notification comes through to the device, as well as choosing an animation type that best suits their tastes. 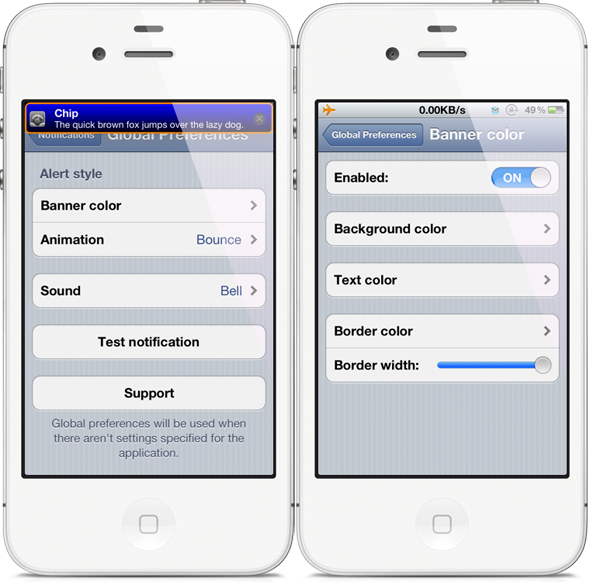 Chip contains comprehensive support for altering the background color of the received notification and also offers the ability to change the font color of the text that is contained within the notification. The border color around the notification can also be amended and offers the user to add a stylish gradient to the banner using a set of RGB sliders. As mentioned earlier, the tweak is finished off with the ability to amend the incoming banner animation, as well as the tone produced when the banner is received.

Chip is now available from the BigBoss repository at a cost of $1.99 with promises from the developer that it will be be compatible with all iOS 5 jailbroken devices.