One of the great things about Apple’s mobile operating system is the almost seamless and perfectly crafted animations that take place when users invoke a certain task, like switching between home screens, opening up a folder containing a number of apps icons or when pressing and holding on an icon to put the device into edit mode. The biggest compliment I can pay to the iOS engineers is that everything just works, exactly as it should, pretty much all of the time.

But what if you have a jailbroken device and fancy switching things around a bit by applying some additional or different animation effects to certain aspects of the system. Thankfully, there’s a tweak for that. Well, there’s quite a few actually, but one of the latest ones to make a splash in Cydia is called UnCurl and adds the extremely familiar page curl effect that is found in iBooks to the lock screen and Notification Center on the installed device. 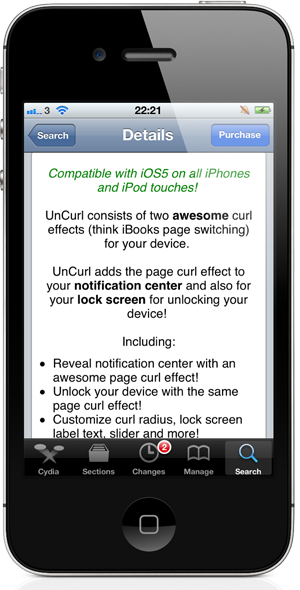 The tweak is available for devices that are running iOS 5 and above, presumably because it makes extensive use of the UIPageViewController class which Apple introduced as part of the iOS 5 SDK. When installed, the package hooks directly into two parts of iOS, the lock screen, by amending the default slide to unlock and introducing the rather attractive curl animation instead, as well as the Notification Center. When the package is activated, invoking Notification Center gives the effect that it is permanently placed behind the home screen and the user is curling the screen away to reveal the notification panel.

The UnCcurl package also comes with its own set of configurable options that are accessible through the native Settings app. Users have the ability to toggle the lock screen and Notification Center options on or off, as well as being able to change the curl radius to suit their own visual tastes. As nice as the package looks and behaves, and as attractive the curl effects are, I can’t help but feel that a few corners may have been cut due to the fact that it looks like the developer has used the same class to capture the screen as part of the curl process that is used when taking screenshots. Not the most elegant way to do it. 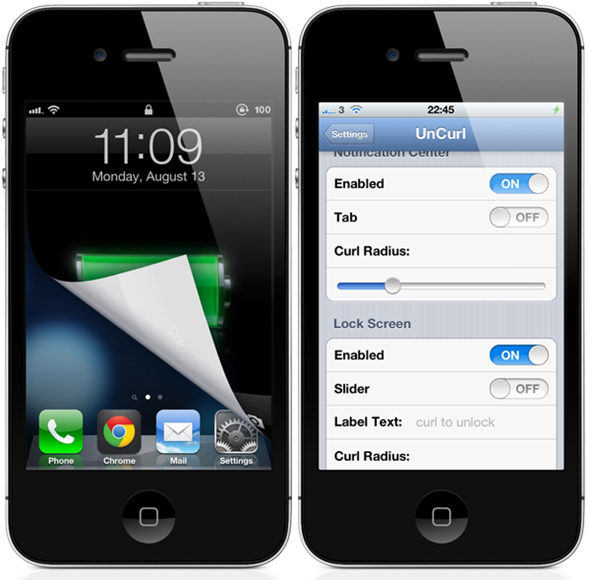 UnCurl is available to download from the ModMyi repository for $0.99 and requires a jailbroken device with iOS 5 or above installed.