Mobile security is very much in the news right now and for obvious reasons, with some celebrities having had some of their most compromising photos and video pop up online following an apparent iCloud security breach. Whether it is an actual security breach or simply the result of poor password choices, the incident has many considering the security of their data.

As well they should, too. Our phones contain an ever increasing amount of data about us. With financial data, medical information and more now accessed and kept on iPhones and Android phones as a matter of course, it makes sense to put some serious consideration into how safe all that data is. 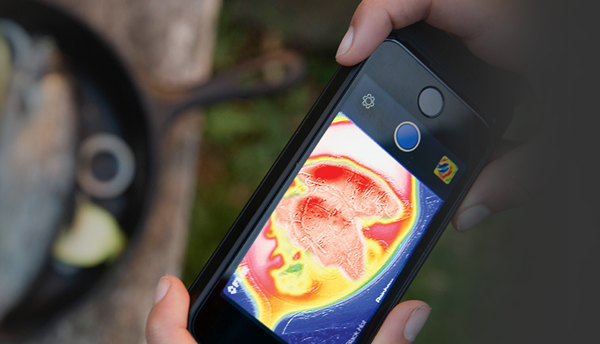 Those iPhones in our pockets may be attractive targets, but they can also be tools for those looking to steal, and with the FLIR One thermal iPhone 5/5s camera case announced earlier this year, users of iPhones can theoretically catch people entering their credit card PINs thanks to the thermal signature left in the card machine’s buttons as they’re pressed. But fear not, because there’s one super simple way to stop would be PIN culprits in their tracks, while putting your mind at ease in the process.

If you’re of the paranoid persuasion, YouTuber Mark Rober has you covered. As he rightly points out, simply rest your fingers on some other digits when entering your PIN so more than the actual 4 digits used get lit up by the heat from your fingers. Simple.

Of course, even if you did manage to end up in line at the market just ahead of someone using a $300 iPhone base with an infrared camera in it, they’d need your card to take any of your cash anyway.

But still, there are a lot of things we have to consider before we eventually come to realize that our personal belongings are at risk. But this doesn’t mean that we don’t try the best efforts from our ends to keep ourselves and others safe.

If you do fear the ‘thermal bandit’ then it’s best to follow the routine Mark Rober has outlined in the video above, but given how expensive the thermal imaging case is in the first place, we doubt you’ll run into the aforementioned bandit in the first place.