While students often get a bad reputation of being lazy, deluded procrastinators, quite a few actually knuckle down and work extremely hard. A group of students studying at the Köln International School of Design in Germany have certainly done that with aplomb, creating a rather wonderful Kinect-based prototype which takes the idea of the coffee table tablet and rethinks it for a somewhat softer surface.

Named Kreek, it includes an elasticated sheet of fabric, upon which images can be projected. From there, Kinect cameras sense your movements – notably whereabouts on the sheet you’ve decided to touch. Some may ask why a fabric sheet would be used instead of a solid surface, but it does have many advantages. As well as being easier to transport and replace, it’s cheap, and the flexibility offered by the stretchiness means those using it can push down for additional depth. 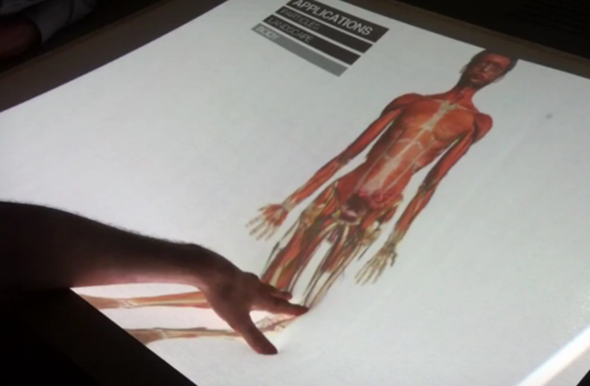 In the fascinating demonstration video, the students are seen pressing down on the projection of a human body, and while a weak press showed muscles and veins, a stronger press revealed the bones of the skeletal structure. Clearly, these students don’t get all of their notes from Wikipedia and Yahoo! answers, and the prototype, which is now at version 2.1, certainly has a great deal of promise – particularly from the educational point of view.

Microsoft’s Kinect Xbox 360 peripheral has been a revelation since releasing in 2010, and taking into consideration the success of the Wii with its motion-based gaming, the Redmond-based software maker really pulled it out of the proverbial bag. While most are happy to use it for fitness or active gaming, these German students have gone above and beyond, and who knows how the finished article might look when it’s complete?

We’ve certainly never stumbled across anything quite so quirky here at Redmond Pie, and as well as the human body, the video also includes a city-like area, which can be pressed to reveal the mantle beneath the earth’s crust, and subsequently, wonderful lava!

It doesn’t trump Google’s Glasses project in the augmented reality wars, but given its origins as a figment of a few students’ imaginations, it’s certainly a great effort – and one we cannot wait to see progress to a finished product.