Ever since the Kinect was released, people immediately began to see that the technology’s potential extended far beyond gaming. A pretty extensive homebrew community surrounding the Kinect developed, eventually gaining support even from Microsoft. That’s not surprising, however, given the plethora of cool stuff developed. And, speaking of cool stuff developed to bring the Kinect to new heights, a research team at the Human Media Lab of Canada’s Queen’s University led by professor Roel Vertegaal developed an insane 360-degree display called the Telepod. Basically, the primary function of the Telepod is to create a 3D hologram that slightly livens up videoconferencing. 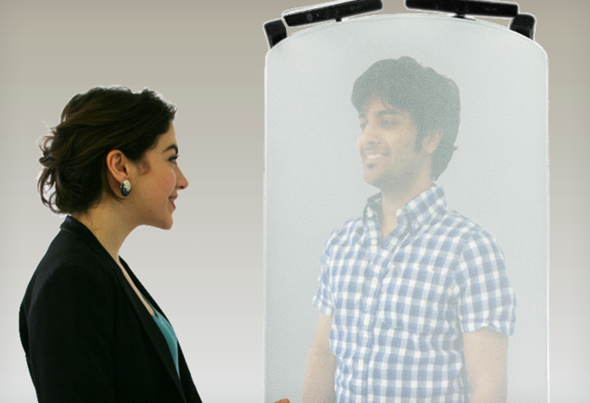 Basically, two people in different locations can simply stand in front of their Telepod and talk to each other like they are standing face to face. The pod captures a 360 degree video image of a person, so, if you are using the pod to make a call, you could walk around the entire thing and see the sides and rear of the person; the Telepod does an excellent job at creating the illusion that the person is physically inside the pod itself. So, what is the technology behind this? Unlike holographic Tupac, this did not require any reverse-engineered future technology from UFOs.

It uses existing technology to make the magic happen; the 1.8 meter tall acrylic pod is lined with six Kinect sensors at the very top to capture video and track movement as well as a 3D projector inside.

Now, on top of the teleconferencing utility of this device, the team also sees an additional use of the technology that could be immensely beneficial to the medical world. Dubbed BodiPod, this could provide a doctor with an X-ray scan of the patient’s body that has “layers” of the body which can be peeled using Kinect motion gestures. This is quite revolutionary as it will allow doctors to communicate with a specialist elsewhere and maybe even give a diagnosis. An even crazier implementation of this is where a doctor remotely could get a good view of the patient and provide advice throughout surgery to the people actually doing the job.

There are quite a few practical uses for this technology. As it stands, it is only a research project with no plans to commercialize it. But I could see this being big particularly with businesses, schools, and enterprises who could utilize this for teleconferencing.