Microsoft is set to kick its E3 off in style in a matter of hours from now, with the console maker about to announce a brand new Xbox One. Coming not long after more leaks surrounding plans for Sony to release an updated PlayStation 4, Microsoft’s own plans for a console refresh are set to come to fruition sooner and E3 is where we will get our first glimpse of the refreshed Xbox One model, unofficially dubbed as ‘Xbox One S’.

With the machine’s announcement imminent, fresh leaks over on the NeoGAF forums have detailed just what we can expect when Microsoft kicks its E3 shenanigans off. 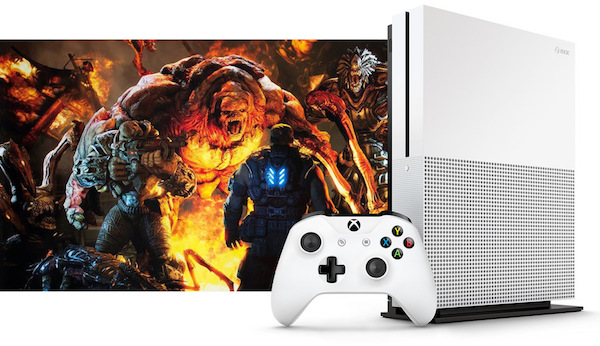 Firstly, the new Xbox One is set to be around 40% smaller than the large console the Xbox One already was. That fits in with the leaked images that have appeared which show a white console that looks noticeably smaller than what is already sat underneath our TV.

Despite being smaller, the new Xbox One will also be the first recent Xbox console to have its power supply be internal, making cabling much easier for those who like to keep things nice and tidy around their entertainment center.

The fact Microsoft has managed to make its machine so much smaller but also include the PSU is great news, as is a further rumor that has the new machine able to be stood vertically rather than horizontally, akin to the Xbox 360 that came before it. Leaks also show a white Xbox One in that particular orientation, so those either with little room around their TV or who just prefer things vertical will be pleased to learn that they will have a choice soon enough.

Alongside the revamped design for the console, the newly updated Xbox One is also said to have a more svelte controller to offer, along with support for playing back 4K Ultra HD video, 2TB hard drive, and High Dynamic Range.

With Microsoft’s E3 event not far off, we expect to be able to see much more of the new Xbox One S soon.