It seems like only yesterday when the original iPhone was announced to the world by the late Steve Jobs, a revolutionary device that was going to turn the industry on its head and be the new benchmark for what manufacturers would need to live up to. Although it seems that Samsung took the challenge a lot more literally than others, the race for the top of the smartphone charts is still going strong, and it’s only a matter of days until Apple introduces the world to their sixth-generation iPhone. We can’t wait.

The numerous leaks and component sightings over the last few months have already confirmed a few things to us, but something tells me that we haven’t yet seen the full story and that Apple will have a few surprises for us next week that we don’t expect at all. As part of the run up to the event, a 3D animation and digital studio in San Francisco have created a rather impressive iPhone 5 concept video that outlines a few features that would be possible with today’s technology, but also what could be integrated into smartphones of the future. 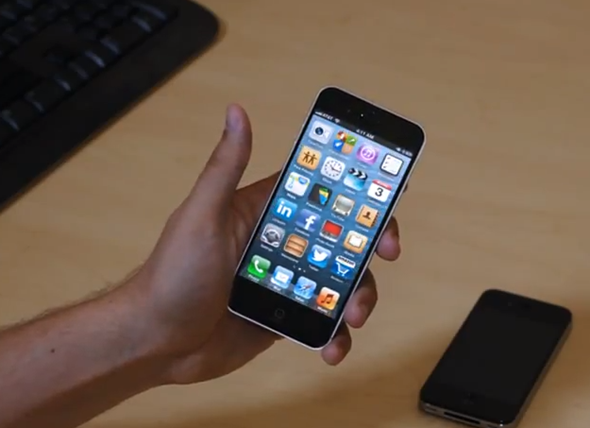 The first feature they have decided to focus on is the ability to wirelessly charge the iPhone. As we’ve seen with the Nokia Lumia 920, this technology is available right now and would definitely provide real-world benefit to users. We would imagine that if Apple were to introduce wireless charging into the iPhone, they would go with the Qi standard, only to ensure compatibility with existing charging accessories. In addition to wireless charging, the studio has also built in fingerprint scanning into the iPhone to offer a advanced security features on the device, much like how it was in the iPhone 5 concept we shared a few days ago, only better. Sliding to unlock would invoke a new display that requests biometric detection to proceed.

As part of their design, Siri also gets an overhaul and appears to have been merged together with Notification Center for spoken notifications. Invoking Notification Center via the usual pull-down menu will allow Siri to audibly announce any notifications. Finally, the most far-fetched feature is the so called rubber band electronics that allows the user to pinch outwards to literally expand the device from an iPhone to a iPad mini to a iPad. Not something we will ever see in my lifetime, but still not beyond the realms of future possibility.

Check out the excellent video for yourself and see what you think.

Thanks, Prashanth, for sending this in!